I’ve fought with Atilla the Hun and Genghis Khan, and this little dipshit is my only hope. 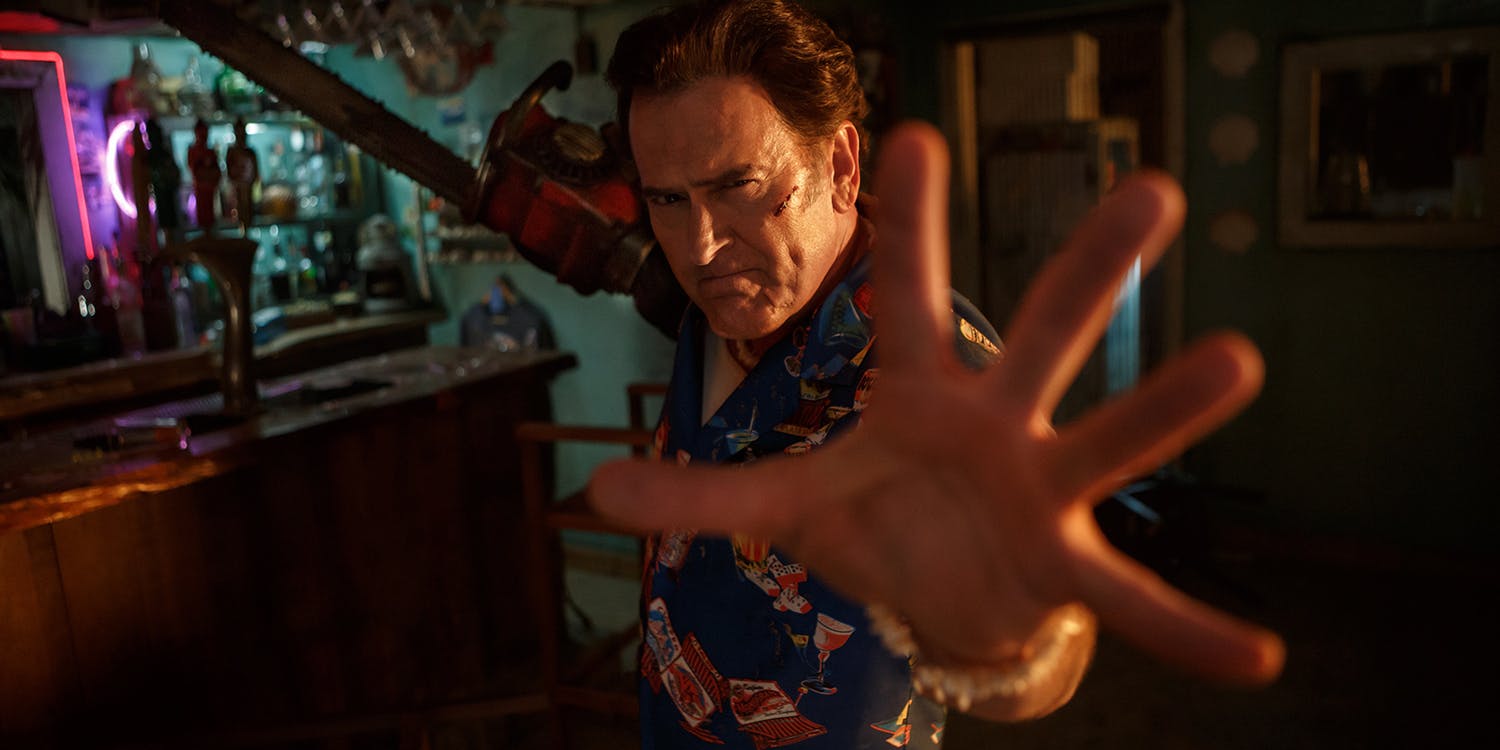 You know what, forget the 31 Days Of Horror. Forget building up to the final day. Who even cares what film series look like with each new instalment? This is the big one. This is the one thing I’ve been desperate to watch. This is the show I’ve been waiting for. This is Ash Vs Evil Dead.

Specifically, this is the second season, and after falling head over heels for the first season, I’ve been grinding my teeth in anticipation for finally sitting down and watching this show. Oh, sure, it’s apparently on Virgin Media. And yes, let’s not go over my feelings on naughty pirates like last year. The fact is, I had no way of watching this show until now. And, if anything, the anticipation made it all the more sweeter. So, on receiving my BluRay copy, I pulled on my Shop Smart, Shop S-Mart t-shirt and dived in. If only I had a Shemp Beer handy.

Consider this your first and only warning. I am about to gush over this show in a way I haven’t in a long time. Ash Vs Evil Dead is not only the television sequel to my favourite film series of all time – it also sizzles in its own glory and I couldn’t help but grin my way through the entire first episode.

It was worth the wait.

Welcome to my world, sweet cheeks.

Before we go any further into the story, let’s quickly recap over the first season. Ashley Williams (Bruce Campbell) has set off on a life of solitude. Kinda. Carrying with him an ancient flesh-bound tome and some serious traumatic baggage, Ash works minimum wage jobs and stays on the road, occasionally dipping into the locals whenever he feels the urge. It was during one of these, ah, dips, that he read aloud a passage from this tome as a way to impress a young woman – and in doing so, unleashes the ancient forces of darkness upon the world.

Teaming up with his co-workers Pablo Bolivar (Ray Santiago) and Kelly Maxwell (Dana DeLorenzo), the team embark on a quest to try and undo the evil – but soon run up against a mysterious figure in Ruby Knowby (Lucy Lawless), who seeks the Necronomicon for her own ends. At the end of a long trail of blood, Ruby has the group cornered – when she and Ash negotiate a deal.

Ash and his friends will be left to live a life of pleasure in Jacksonville, Florida, in exchange for Ruby being unmolested in her pursuit of demonic control over the world. Sounds fair, no? 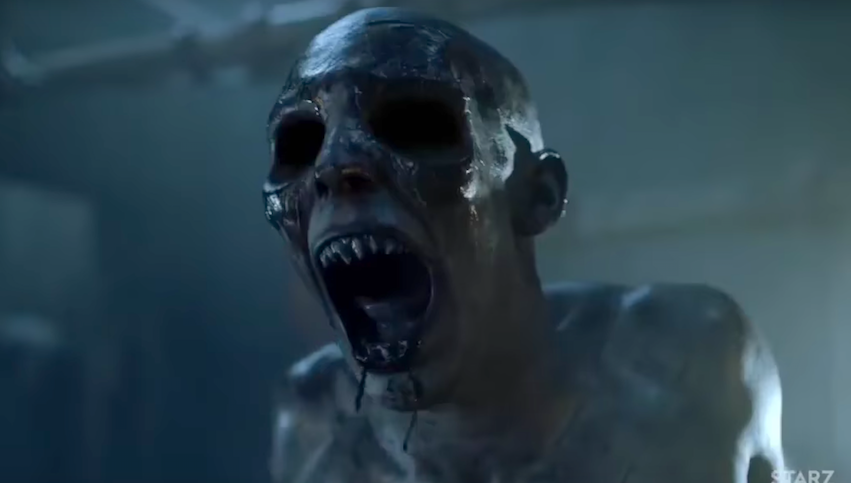 Flash forward to today and Ruby isn’t looking quite so in control. Chased through a hospital corridor by a pair of nightmarish demons, Ruby clutches the Necronomicon to her chest. Eventually shaking off the demons with some cunning magic, Ruby curses herself as she turns the pages of the book – and the primitive drawing of a familiar figure amongst the pages. She needs Ash, and it’s time to summon the little dipshit. 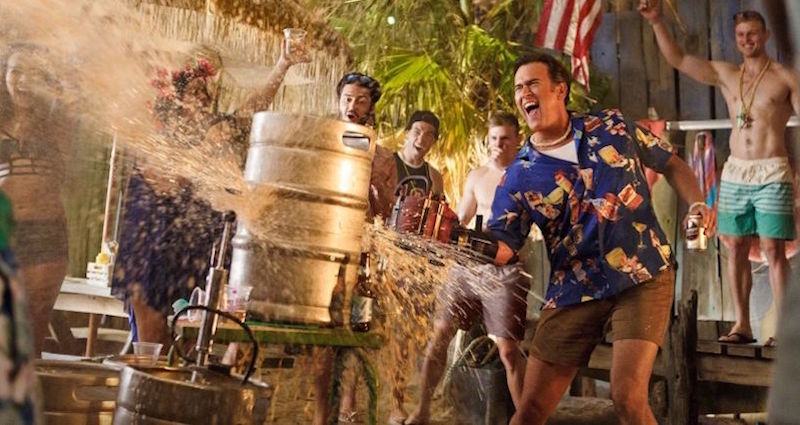 Meanwhile, in Jacksonville, Ash is having one hell of a party. While Pablo and Kelly watch on, bemused, Ash celebrates the only way he knows how – with beer, boomsticks and babes on all sides. Of course, it only lasts so long, and soon a dark vortex appears overhead – with two women possessed by Kandarian demons – demanding he return to Ruby.

Not content with taking orders from a pair of deadites, Ash, Pablo and Kelly return to full form – fighting off the evil dead with whatever comes to hand. Blood flies everywhere. Visual references to the classic films come thick and fast, with some amazing visual gags – a trademark of directed Rick Jacobson, if the commentary is anything to go by. 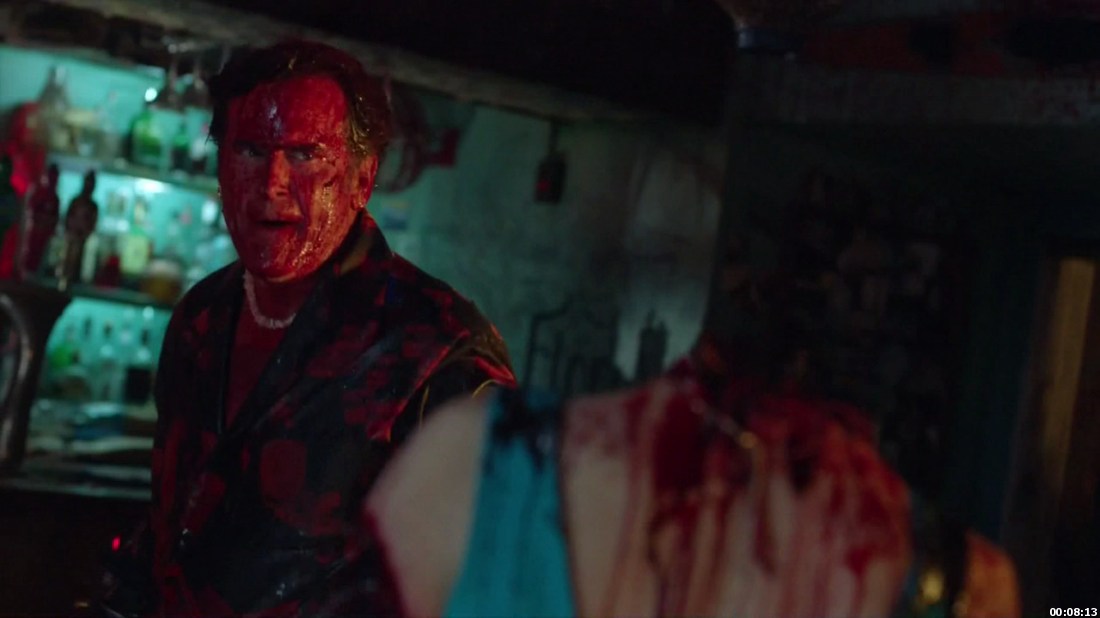 During the fight, one of the deadites lets slip a clue as to Ruby’s location by referring to Ash as ‘Ashy Slashy’ – a local nickname for the supposedly psychotic madman that Ash became back in that cabin in the woods. Setting out to fix this mistake, Ash and the gang head back to Ash’s hometown of Elk Grove, Michigan. Here they meet Ash’s father, Brock (Lee Majors), who is stunned to see Ash looking so old. Referencing his new robotic hand, Ash is quick to point out that he is better, stronger… faster than before (GET IT?). 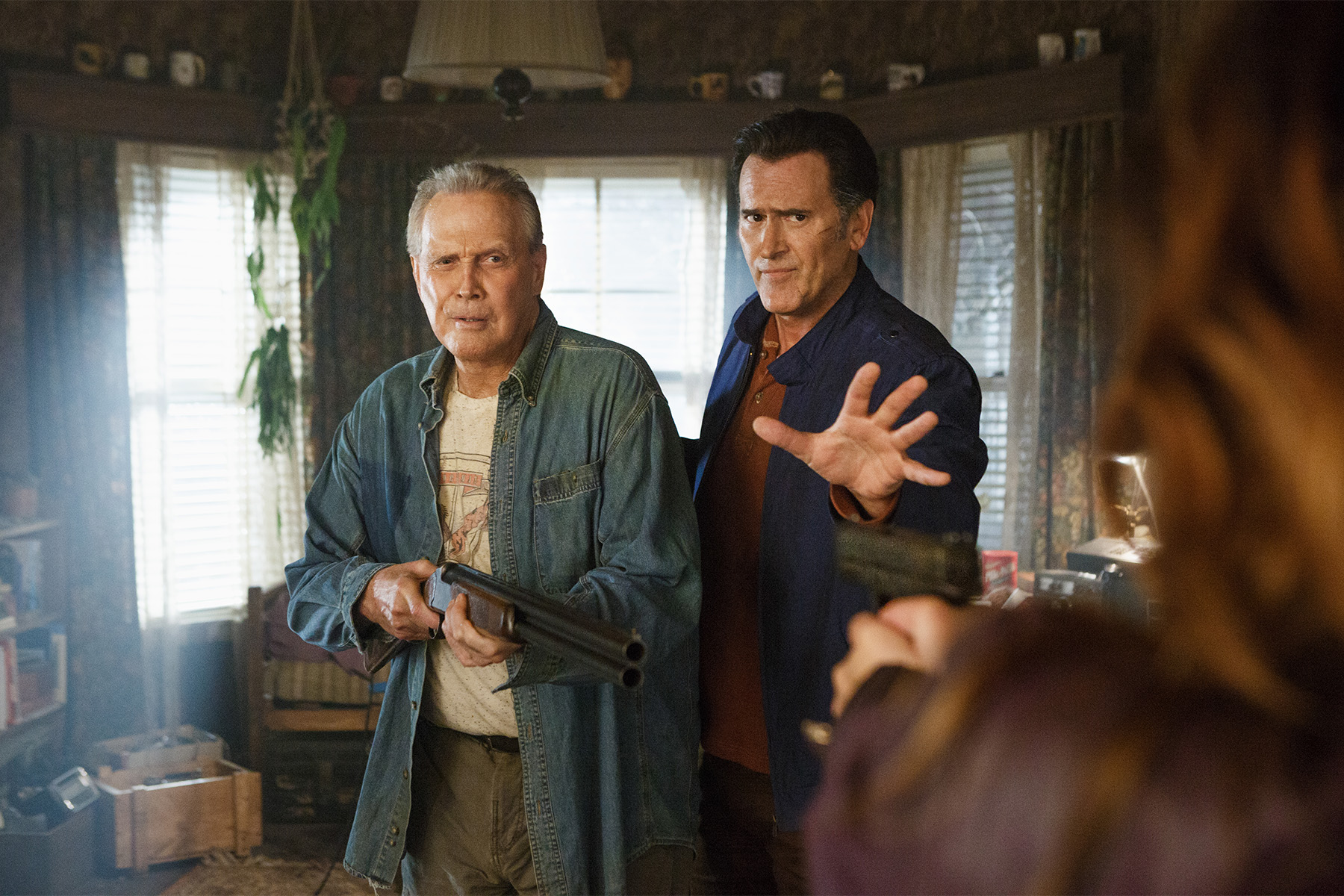 Setting aside his atonement with the father, Ash and the gang set out to find Ruby. While wandering the streets, Pablo receives a vision, pinpointing Ruby’s location – a hangover from the time spent under Ruby’s spell during the finale of the first season, it would seem. Tracking her to the local crematorium, Ash finds Ruby injured and under attack by her demonic minions. Swearing that this is no trick, Ash finally relents and attacks the creatures – saving Ruby from her inevitable fate.

Regrouping with the others, Ash and Ruby swear to a temporary alliance to recover the Necronomicon before the demonic creatures get it for themselves, thereby establishing the new dynamic for the season, and taking the first steps on a long road of adventure.

We get the book, send your loser kids back to Hell, we’re back in Jacksonville by Friday.

It’s hard to really capture the tone and passion in Ash Vs Evil Dead in writing. This show lives and breathes visual comedy and action. Much more so than the first season, Bruce Campbell’s incredible talent for physical acting and timing is put to the test – with some incredible slapstick gags and physical violence taken to the extreme. Within minutes, you have Lucy Lawless covered in demonic bile, Bruce cutting a keg with a chainsaw and, in no time at all, a barman being chewed up by a demonic equivalent of a meat grinder – spraying the lead actress with over 26 gallons of fake blood. Incredible. 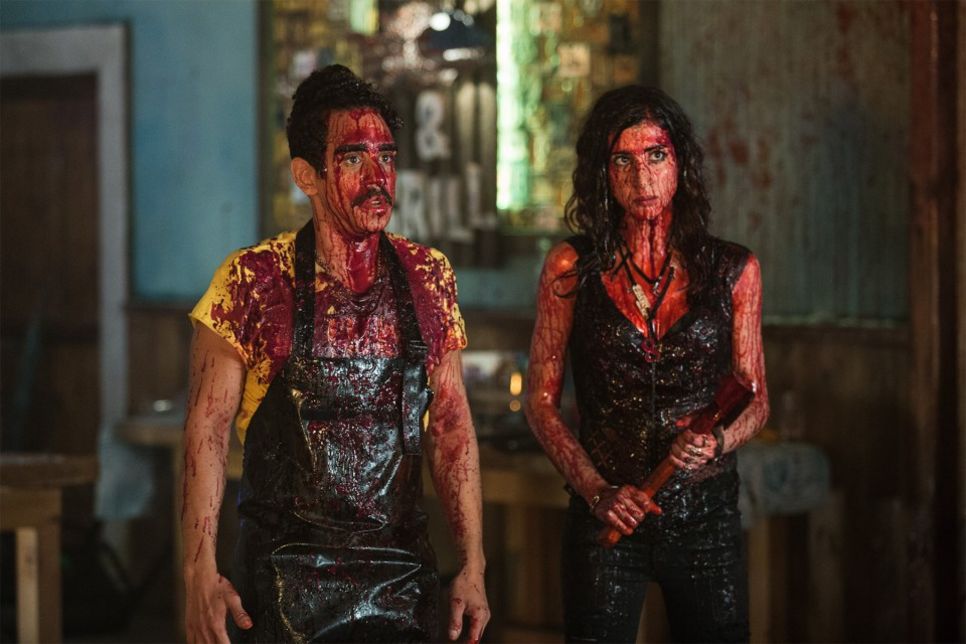 I am not kidding when I say I was grinning the whole way through, in actual fact I was laughing out loud for most of it. Some incredibly unexpected belly laughs came from the visual comedy, while the characters are as strong as ever. The character of Kelly, in particular, appears to be being set up as a heir to Ash’s throne, with haunting voices teasing and tormenting her moments before she loses it and starts fighting back.

Interesting, there seems to be a real Army Of Darkness (1992) vibe to several scenes, including Ash shouting down the primitive locals of Elk Grove, as well as some very familiar looking visuals in the crematorium as the spooky windmill in AoD. I thought that due to copyright issues, this film was supposed to be ignored for the most part – but I guess this is no longer such an issue. Whatever the case, it was a welcome addition to the otherwise quite serious – if over the top – action sequences throughout the episode.

So, in conclusion then, go and buy this show. Buy it twice. There is a doubt where Ash Vs Evil Dead will exist in the future, mostly due to the nature of the show making it quite an expensive investment by Starz. Combine this with record levels of piracy, and the future of this show isn’t looking good. If you love this, buy it. Invest your time and money because, frankly, there is nothing with this level of creativity out there on mainstream television. If this dies out, you just might never see its like again.

So if we want to #bringbackboomstick – it’s down to you as much as anybody.