Within any genre, of virtually every medium, you’re going to start seeing patterns. Some of these patterns occur enough that you can pretty safely say that what you’re watching isn’t just a style, it’s a sub-genre in itself. This is particularly evident in horror movies, where the genre can stretch from psychopathic killers wearing frilly knickers, to possessed toys and all the way up to supernatural knife-wielding maniacs talking to the devil.

One such sub-genre of horror is what I like to call, ‘Rich White People In Rich White Houses’ – or RWPIRWH. A curiously American form of horror, no doubt stemming from the wealthy suburbs of Los Angeles – where the writer/director just happens to live. The pattern is simple, you have a rich, sexy couple move in to a new house, with or without children, and proceed to uncover the terrible history of the previous tenants, most likely involving something to do with the basement – and more often than not, an old rusty furnace that just so happens to be in said basement. It all kicks off, and yada yada yada, you have yourself a horror movie.

Which brings me smoothly onto The Black Room (2017), which just so happens to be available on Netflix right now. While it absolutely falls into the RWPIRWH category, The Black Room also manages to leap head first into the sex comedy-cum-trashy 80s B-Movie mould. In other words, you’re going to see some tits and the ending probably won’t make any sense. It is exactly the type of trash I adore.

Written and directed by Rolfe Kanefsky, The Black Room opens on a house at night. Somewhere, in the darkest corner of the property, something is trying its best to smash through a door. Barricaded and locked tight, the door is the barrier between this world, and the other domain. Hearing the door, an elderly Miss Black (played by horror veteran Lin Shaye) calls out the supernatural force, declaring that it won’t escape under her watch.

Only when she realises it has escaped under her watch, and is proceeding to engage in, ah, relations with her granddaughter Dawn (Alex Rinehart), does she storm down to the basement to confront the evil – followed into the dark depths of the eponymous Black Room by her granddaughter. Accompanied by an amazing combination of synth, shrill violin strings and classic ‘blob blob blob’ noises, this introduction tells you everything you need to know about the film.

It doesn’t take long before their arrival sets off a series of events that lead to the deaths of several workmen hired to fix up the property, but around the time Jennifer’s sister Karen (Augie Duke) arrives to check out the new house – things really start to go wrong. Lured into the basement, Paul begins to… change. Picking up a British accent, for one, should always be a red flag. But hey, ho. Slowly, Paul and the environment around him appears to feed off sexual energy and frustration, teasing and seducing all who enter the house, and even beyond it.

I’m not going to go ahead and spoil what happens here, because if you enjoy trashy movies, this is a must watch. Not afraid to show off skin, or enormous flesh-tearing demon cocks for that matter, The Black Room is a pastiche of every terrible 80s film, without ever feeling like it was winking at the audience. A particular highlight for me was fairly early on, with the couple being seduced in separate rooms, yet neither knowing exactly what is going on. Paul’s expression when Jennifer enters the room, shortly after having an unknown shape join him under the covers – well, it’s certainly a concept for the world’s darkest sitcom.

It’s not all perfect, obviously. The hackneyed plot works as a basis for humour, but at around the third act, it just felt a little dull. I feel like this is the same with a lot of lower budget productions, where the energy just seems to taper away when the mystery is out. The low budget is especially obvious with the post-production effects, which bounces back and forth between cheap and shit. However, the practical effects were genuinely impressive – particularly on the prosthetics that are used throughout. 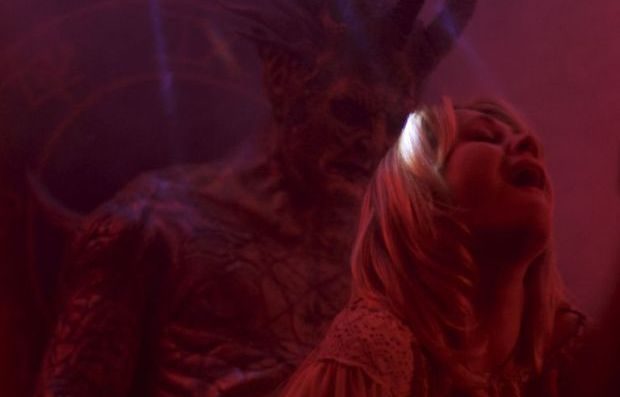 Is it the best film out there? No way.

Is it worth watching? Definitely.

If you need any more convincing, just check out this review left on IMDb by the impressively hard to please horror movie viewer mousta-56507:

I have no idea why this is rated so high. I actually had to look it up here to see if it was supposed to be a horror movie or comedy. It is like some trash movie filmed in the 80s. Plenty of nudity though if you are into that sort of thing. It really reminded me of the first Hellraiser. That movie was scary when it came out but if you watch it now it’s laughable. At least it had a storyline worth following.