There we were minding our own business, just doing chores around the house, when kids started killing themselves all over my property! 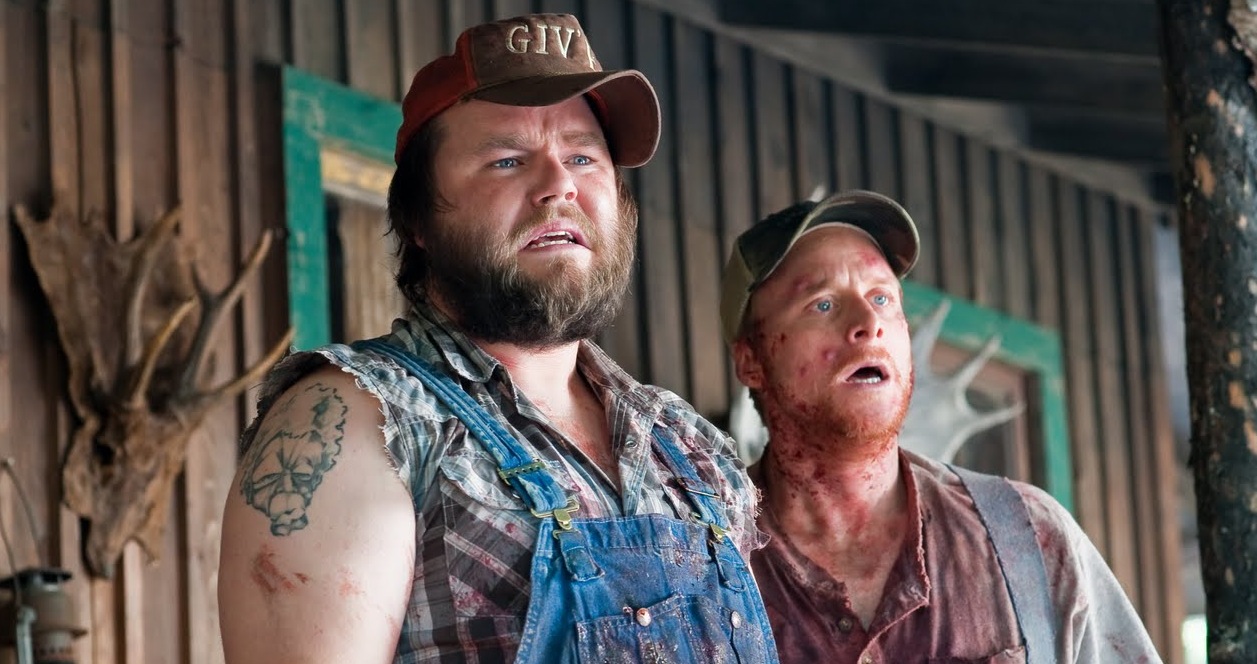 Whether you’re a casual movie or television viewer, or a dedicated cinephile, you will know the following statements to be true:

And, finally, you should never, ever, drive into hillbilly country.

It doesn’t even matter if you’ve seen Deliverance (1972) or not – you know exactly what it’s about. You know that as soon as you leave civilisation, you’re entering a strange tribal land of sweaty, beardy men, inbred mutants and all the moonshine a person could ever ask for. You would also be forgiven for thinking the land itself is watching you, I hear those hills have eyes.

Stopping at a gas station, the group attract the attention of a group of local hillbillies, who leer and stare across the forecourt at the skimpily dressed girls, and square jawed boys at their side. Two such hillbillies, however, don’t seem quite so frightening. Full of anxiety, Dale (Tyler Labine) tries to summon the courage to speak to them, and is encouraged by his buddy Tucker (Alan Tudyk) to try and speak with Allison. Picking up his scythe for luck (I guess), Dale approaches the girls, and proceeds to stammer and sweat – scaring the hell out of the whole group.

This scene basically sets the tone for the rest of the film. Cursing himself for his bad luck and anxiety, Dale sheepishly sets off with Tucker to find their new holiday home, which is, of course a creepy decrepit cabin in the woods. Dismayed at its appearance, the two set to work fixing the cabin up to make it a place of their own.

Nearby, however, the college kids have set up camp, and later, when they decide to go skinny dipping, run into Tucker and Dale innocently fishing. Seeing the creepy guy from the gas station, Allison freaks out and falls from where she is about to dive – hitting her head and sinking deep into the water. While her so-called friends scream and panic, running back to camp, our two heroes manage to pull her out – saving her life.

Later, Allison wakes up to find her wounds have been bandaged, and though initially terrified, soon settles in and befriends the hillbillies. Naturally, the college kids are convinced that Tucker and Dale are, in fact, psychopathic animals that have kidnapped their friend, and arrive to rescue her. Things really come to a head when an accident involving Tucker, a chainsaw, and a concealed bee’s nest in a hollow log. Terrified and assaulted, Tucker tries to escape the marauding bees, running deeper into the woods – directly at the waiting college kids. Suddenly, a swollen, badly stung hillbilly is running at them, screaming, and waving a chainsaw, and naturally they panic. As the kids scatter, Mitch is distracted to see that Tucker is, in fact, running past them. But before he can work this out in any detail, Mitch is even more distracted by the broken tree that he has just impaled himself on. He dies, watching a bee rest on his skin.

When the kids return to find Mitch’s body, Chad declares that the hillbillies must die – and they are now at war. 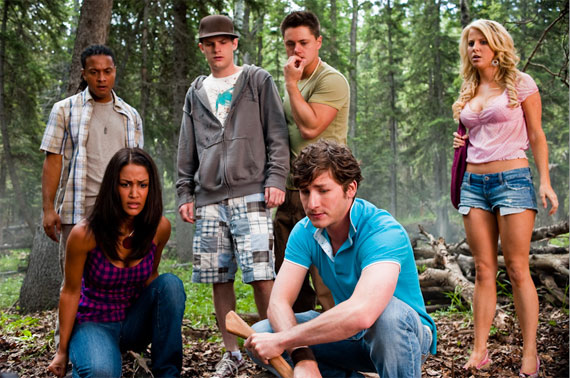 What follows are an increasingly contrived set of coincidences and misunderstandings that serve to present Tucker and Dale in the worst possible light, while Allison gets closer and closer to the anxious, but lovable Dale. As the ‘war’ continues, through accident and Darwinian selection, the body count begins to pile up. But who will survive unscathed, and is there a darker secret at the centre of all of this?

I love this movie. There was a time, in a flat somewhere outside Bristol, that my flatmate and I had this DVD sat on our coffee table (really just a box with a bed sheet over it), just gagging for the time we could find an excuse to watch it again. We loved it so much, I remember being distinctly unimpressed when a mate of ours slept on our sofa and decided to go ahead and watch it without us. Bastard.

If I had to get pernickety, the reveal in the final act always seemed a bit out of left field, and probably didn’t really need to be in there, but it’s such a minor thing. In general, the film perfectly walking the line between farce and genius, writer/director Eli Craig really captured something in Tucker & Dale Vs Evil. The casting and performances by the college kids is inspired, in any other movie there’s a good chance you will be rooting for them – but not in this movie! Rarely do you find such a group of deserving horror movie fodder than this, and, to add the icing on the cake – they are their own worst enemies.

In other words, it is a wonderful parody of everything you have come to expect about a horror film set deep in the American wilderness and it deserves all the love and attention you can muster!