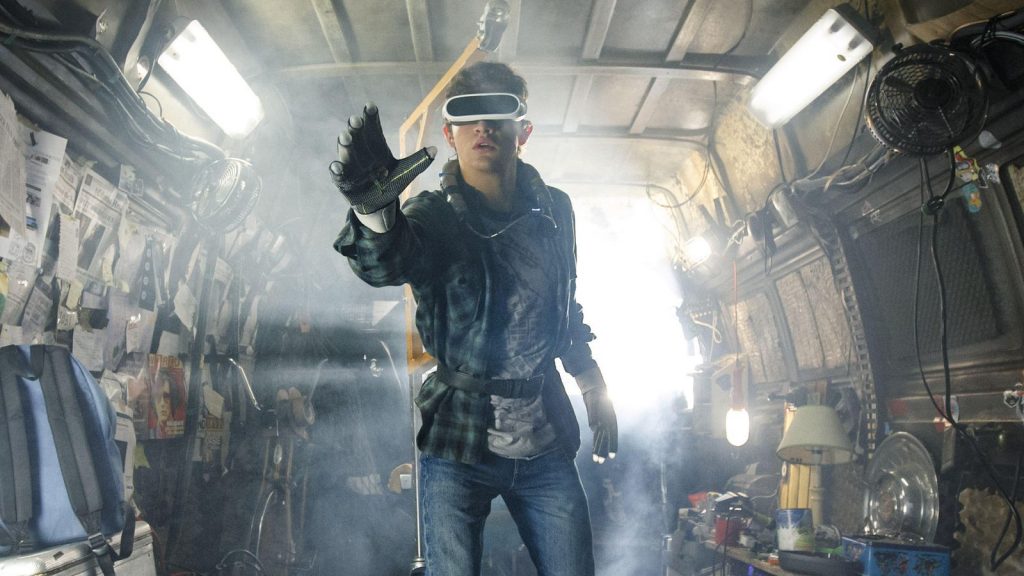 Does anyone remember when the term ‘geek’ was an insult? In this world of geek chic, thick rimmed glasses and quirky kitsch t-shirts on every other person on the high street, you’d be forgiven for thinking that this was centuries ago. One quick google and you’ll soon find that no one is really sure when exactly geekery was reclaimed by the masses – but it certainly seems that technology played a huge part in this.

Specifically the iPod, then later the iPhone, had a huge role in turning geeks into the new cool. Speak to anyone over a certain age and they will almost certainly have a story or two to share about their experience staying in and testing out different file sharing programmes to steal literally everything that could possibly be digitised – and tell me that doesn’t sound geeky.

What I’m saying is that geeks go hand in hand with technology. This doesn’t get much more obvious than with the novel-come-blockbuster Ready Player One (2018). Both written by Ernest Cline, with Zak Penn helping out with the screenplay, and directed by Steven Spielberg, Ready Player One takes the nostalgia craze to its most extreme. Packed with references, nostalgic flashbacks and a mosaic of everyone’s favourite examples of 80s culture, it’s sure to win over every self confessed geek in the land.

But maybe that’s just me.

It certainly seems to be.

Who is this ‘Parzival’ and how the hell is he winning?

Set in the year 2045, Ready Player One takes place is a world that has long since given up. In the opening narration, we discover that crisis after crisis has taken place long ago leaving a world that has stopped caring about trying to actually fix things, instead just hoping to live on and get through the other side. Huge swathes of the population, at least in America at this time, have taken to living in the slum-like ‘stacks’, a sort of cross between a scrapheap, trailer park and a game of Jenga that has lasted far too long to remain safe.

Thankfully, the world has an easy escape. Known only as OASIS in the film, the virtual reality world has become a safe haven and hub of the community for humanity. By popping on a pair of feedback gloves, a headset and some form of treadmill or harness, anyone can tap into a vast world of unlimited opportunities and endless possibility – for free.

The creator of this virtual paradise, the suspiciously Garth-like James Halliday (Mark Rylance), is revered as a god by many and since his death, multiple users across the world have tried to take part in a vast treasure hunt left by Halliday to find a set of hidden keys that will lead the lucky winner to a vast Easter Egg – promising Halliday’s enormous share of wealthy and sole ownership of the OASIS.

This is opposed by IOI, a mega corporation that has its own desires on OASIS, and who we must assume are evil because the CEO, Nolan Sorrento (Ben Mendelsohn) is a bit of a dick, despite never really being told why they are the bad guys, or what it is they actually want. 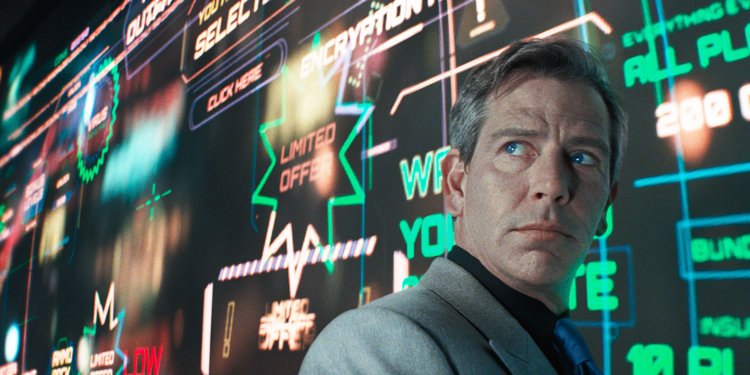 The first of the keys is open to all – and exists as a prize for winning a simple race through a virtual New York City. Among many others, we see Wade Watts (Tye Sheridan), going by his elven avatar’s name Parzival and his good friend Aech (Lena Waithe), a sort of orc thing that runs its own garage and is a highly skilled professional modder gather at the start line. Like everyone else, Parzival and Aech are able to choose their preferred method of transportation. For Aech, a beefy monster truck, while Parzival chooses a DeLorean straight out of Back To The Future (1985).

It doesn’t take long before the race begins in earnest, and we are treated to a mess of CGI bashing about a bit as cars explode left and right, slamming into buildings and becoming the victim of not only a Tyrannosaurus Rex, but a ruddy great King Kong, too. During the race, Parzival spots a female avatar riding a bike straight out of Akira (1988), who he recognises as a famous treasure hunter (or Gunter), Art3mis (Olivia Cooke). In this dictionary definition of a meet-cute, the two are soon at odds – both coming within reach of the finish line before King Kong finally puts a stop to it all. 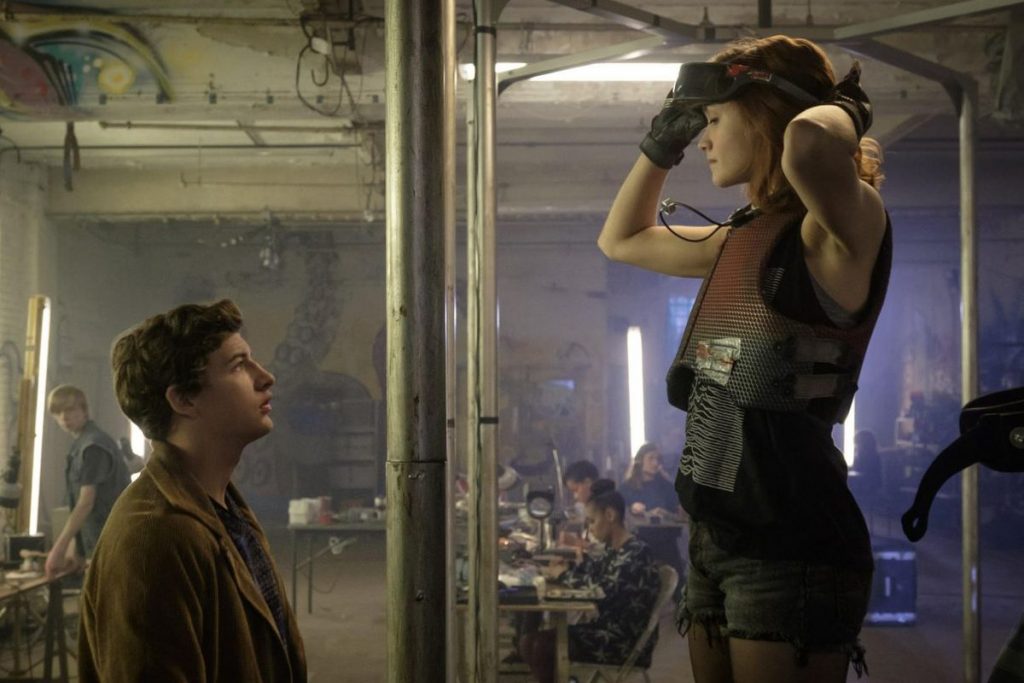 Apparently intensely interested in each other for some reason, Parzival, Art3mis and Aech soon all become best of friends, with Parzival digging deeper into Halliday’s past to unravel the clues to piece together the parts of the treasure hunt. One by one, the gang pick away at the clues and begin to succeed in fetching the keys using a combination of vague logic, nostalgic trivia and debatable conclusions.

This does not go unnoticed. As our heroes’ names begin to appear on the vast virtual high score table, Sorrento and IOI become increasingly frustrated at their success. First attempting brute force, then more subtle attempts at subversion, IOI begin to show their hand in the race for the Easter Egg – becoming increasingly vicious and aggressive in undermining the gang’s work. But will Parzival get all three keys in time, before IOI are able to cut off the masses of Gunters in their attempt to access wealth and power? Will he manage to get the girl, or will Art3mis be anything more than a shallow prize to be won by the smug prick of a hero? Will there be any more surprises in store? Will we ever actually be introduced to all the other token actors?

Having skimmed through social media, I am fully aware that I seem to be the only person in the world who hated this film. But I did. And I’m not saying this in an attempt to fake a counter-argument to a popular film. I’m trying not to be snobby, or elitist, or anything. I can only speak for how I felt as I watched this unfold, and I felt bored.

It doesn’t matter how many pop culture icons you can crowbar onto the screen. Yes, I see you Robocop. Yes, hello Mr Protoss. Oh, Chucky. They got you too, huh. Oh is that a pulse rifle from Aliens? Great. I get the references. I feel like I probably understood them all. I just found it physically and emotionally impossible to care about anything I was watching.

With the exception of Wade, and perhaps Aech, I failed to spot any character development. I certainly didn’t spot any depth, and certainly no arcs. You have a hero that walks up to a problem, and with no example of previous knowledge, finds the solution and moves on to the next issue. There was no challenge, the risk was minimal and the overall impression was one of a giant shrug.

Art3mis, in particular, felt so shallow. Beyond simply being a trophy for the hero to win at the conclusion of the story, she seemed little more than a romantic distraction – when I’m sure even in the source material she was considerably more than that.

As for the action sequences, I get that a movie should be more visual than the novel, I get it. But I could feel my concentration just drifting away. I couldn’t care less about anything I was watching, and legitimately had less emotional connection than I had with the South Park Imaginationland story line that basically did the same thing 11 years ago. 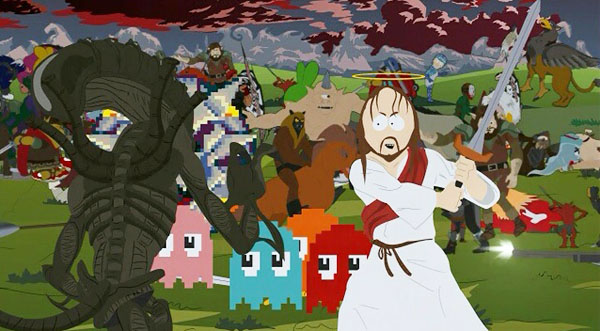 That said, for all that I hated, one section set in the Overlook Hotel from The Shining (1980) took me by pleasant surprise. For a film about nostalgia, this was the only sequence that felt true to source – for a bit, anyway. Things rapidly get out of hand, but for those split seconds of grainy film and creepy twin girls, I kinda got it.

Then it went away again.

Before I conclude, Alan Silvestri was credited as the composer for this film – but I can’t help but feel something was lost in translation here. During the opening action sequence, there was no music. Later, during a quiet character moment when boy meets girl in the real world, there’s a weirdly upbeat celebratory beat bubbling along beneath the dialogue. Eh? Surely this would have been a good moment for silence, with the cool breeze of reality in the background – rather than the epic action sequence used as the opening hook?

In short, then. I hated this film. I genuinely don’t understand the praise its getting, and can only assume that the OMG GUNDAM?!!?1!11 reaction is what’s keeping this film afloat – because it sure as hell wasn’t the writing, the performances, the music or the emotional depth. Still, at least it was efficiently convenient for everyone to be so close to each other the whole time. Good work, lads.

Yours, A P Tyler.