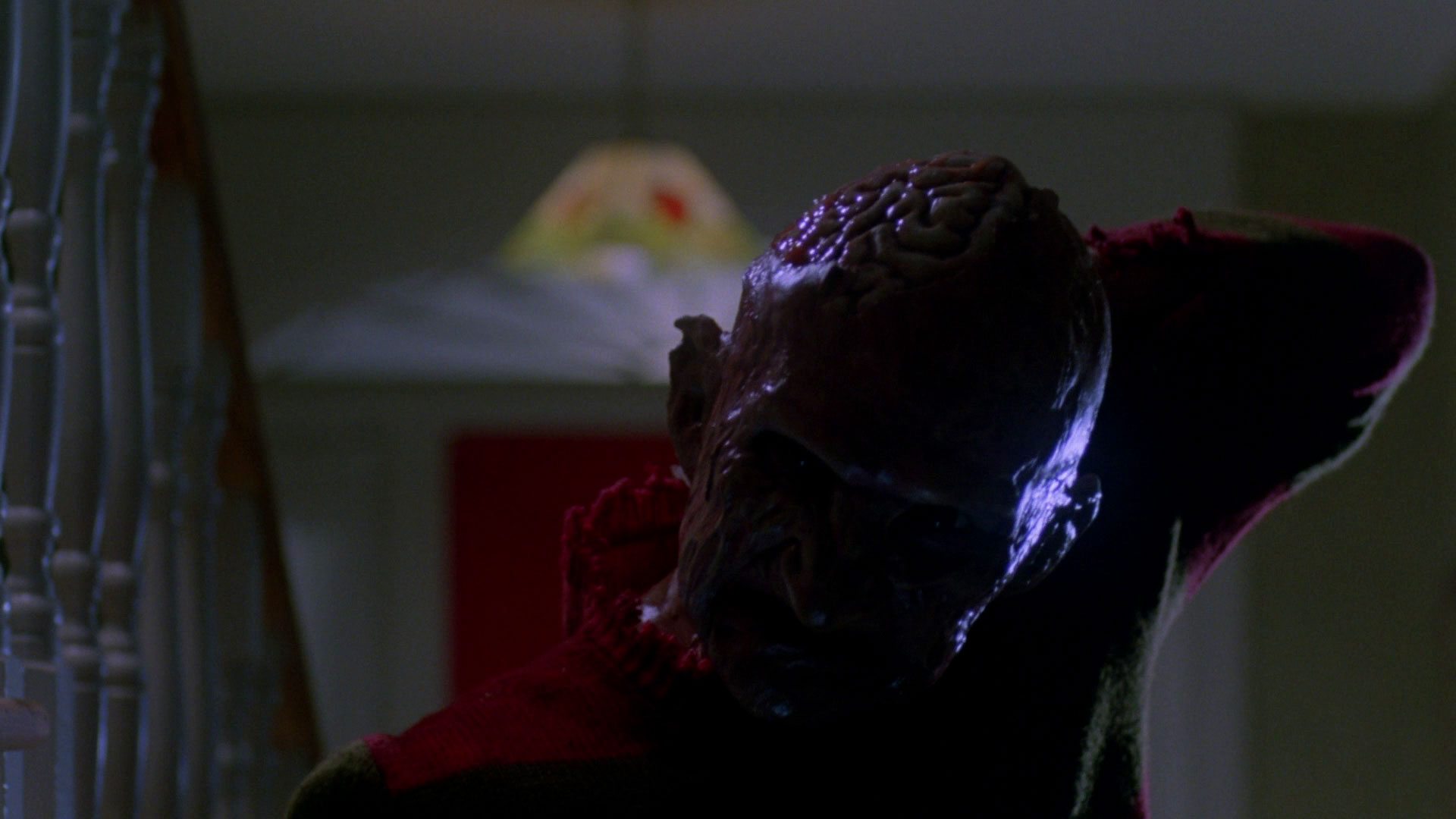 It’s weird looking back at the “classics.” When you consider the huge impact on popular culture by various horror icons, like Michael Myers, like Jason, it’s hard to believe that there was ever any doubt on how to tell their stories or deliver the goods, as far as the audience demanded at the time.

There is no bigger shock than that of Freddy Krueger. Referenced to the point of no return, Freddy has forever been part of my cultural upbringing – long before I ever actually watched a film with him in. But apart from a shockingly impressive opening movie, the franchise had still to really take off. Tonight’s film is the epitome of this. A Nightmare On Elm Street 2: Freddy’s Revenge (1985) was a deliberate effort by New Line Cinema to cash in on the success of the original.

While it did indeed work out for them, the sequel broke virtually every rule set out in stone by Wes Craven. Disregarding the simple fact that A Nightmare On Elm Street was supposed to be a standalone movie, it was established that Freddy murdered people in their dreams. A school kid could tell you this. For the sequel? Not so much.

Hell, they even tried to hire someone else to replace Robert Englund to cut costs before quickly realising their mistake and forking up the dough. I mean, wow.

It’s been five years since the events of the first film, and 1428 Elm Street has new residents. The Walsh family, made up of Ken (Clu Gulager), Cheryl (Hope Lange), Angela (Christie Clark) and struggling teenager Jesse (Mark Patton), are barely settled in by the time we join them. Boxes remain unpacked and, what’s worse, the air con doesn’t even seem to be working properly.

At least, that’s what they blame the heat on Jesse’s room on. Each night, Jesse has had nightmares as he sweats in bed, and tonight is no exception. Seeing himself as a creepy loner on the back of a school bus, he watches helpless as the bus driver puts the pedal to the metal with himself and a couple of girls in the back. Driving on past the end of the road, the bus driver parks up on a perilous tower of rocks – before he turns, approaching the children, the knives of his glove screeching along the bus interior…

From the kitchen, the Walsh family hear Jesse’s screaming, prompting Angela to ask: “Mom, why can’t Jesse wake up like everybody else?”

Serious question: Is this the funniest opening line of dialogue ever written in a horror movie?

Later, and shortly after an awkward scene of Jesse enjoying himself while he thinks he’s alone, Lisa comes by Jesse’s house to help him tidy his room and unpack his boxes. While in the cupboard, Lisa stumbles on a diary that belongs to one Nancy Thompson – who lived here before Jesse. Inside, the two discover what happened four years previous – learning of Freddy Krueger and Nancy’s helplessness in the face of evil. 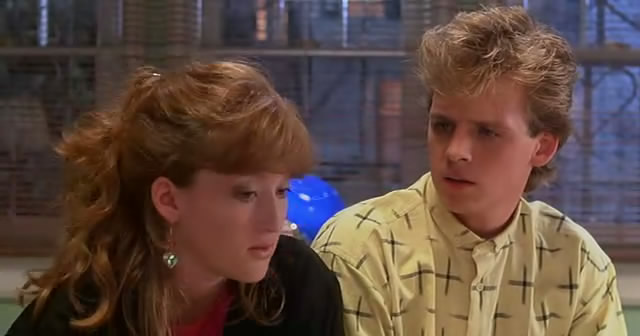 Naturally, this does little to help Jesse’s nightmares –  which are growing in intensity. In one such dream, he tracks a mysterious figure into the boiler room in the basement of his house. Here he is confronted by a rotting figure dressed in a fedora and striped jumper – it is Freddy Krueger! (Robert Englund, obviously). The ghoul threatens Jesse, insisting that he work for Freddy and kill on his behalf. 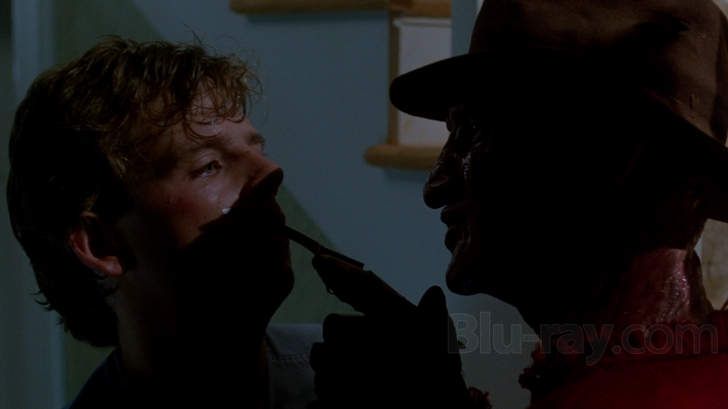 Desperate not to see Freddy again, Jesse tries his best to stay awake by popping pills. Eventually, he takes to the streets, and ends up wandering in a local bar. Full of leather-bound alternative types, Jesse is caught buying beer and swiftly reprimanded – by none other than Coach Schneider! Taking him to the school in what is an extremely illegal and dodgy situation, Jesse is made to run laps around the gymnasium before being directed to the shower.

While Jesse showers, Schneider is attacked by a ghostly force in his office. He is dragged, bound and stripped in the shower. He pleads with Jesse to help, but as the steam from the shower obscures the teenager, the figure of Freddy appears – tearing into the coach with his clawed glove – and soaking Jesse in blood.

Terrified that he is the source of Schneider’s murder, Jesse begins to become more and more introverted, his sleepless nights making me feel more and more an outsider, while he is teased and taunted by the idea of Freddy using him to kill. His parents begin to suspect he is on drugs, and are convinced he might be mentally ill. Concerned, Lisa tries to comfort and support Jesse, who she is convinced might be psychically picking up on the ghost of the past.

She continues to try and help him, but Jesse runs to Grady for help. As Grady himself puts it, “She’s female, and she’s waiting for you in the cabana. And you wanna sleep with me.” But will he be able to resist Freddy’s power and keep his secret buried from his friends and family, or will his inner demon be released into the world, unbound, uncloseted, and full of pride?

Am I going crazy, or is this bus going too fast?

It’s really no secret that Freddy’s Revenge is loaded with homoerotic subtext. Deliberately worked into the script by writer David Chaskin to provide depth for the characters, but somehow missed by director Jack Sholder – I can’t say it isn’t an interesting idea. Coinciding with the idea of being possessed by the spirit of an serial killer, the idea of keeping a part of yourself buried from the outside world certainly seems like perfect fodder for a thoughtful horror story.

It’s just a shame that, in doing so, the horror film lost itself in virtually every other way. While A Nightmare On Elm Street excelled in telling a progressive story with growing threat and an understandable motivation for all involved, Freddy’s “revenge” just felt lacklustre and ill thought out. Everything except for his signature weapon seemed to be removed from the story, with the nightmare sequences being more of a gateway to possession more than anything else – which is a strange way to take the franchise after the initial film. 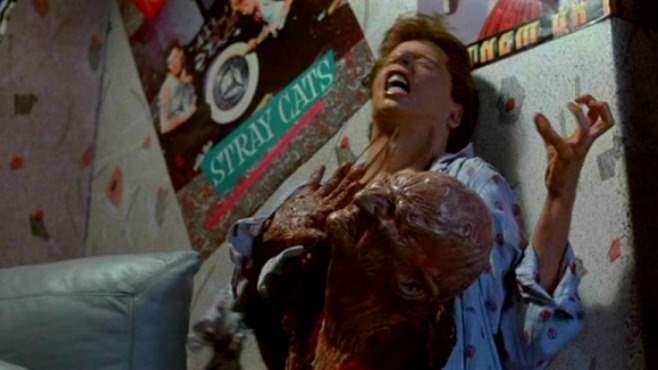 That said, while nothing will ever top the blood volcano sequence, this film does boast some quite impressive special effects. Notably, the scene in which Freddy tears his way into the world through Jesse’s skin is shockingly well done. The performances, too, were generally very good. Robert Englund, in particular, is the saving grace of the picture. I would have liked to see him more often, but I know for a fact that this perhaps goes too far in later sequels – but that will have to wait!

Overall, then, pretty average as far as sequels go. It doesn’t do anything to push the story forward, in fact it is more of a sideways step than anything else, but at least you could follow the story – even if it was a little lacklustre.