It’s Good To Be Back.

Piracy doesn’t sit right with me. Whether it’s music, television series, movies or Spanish Doubloons, I just can’t enjoy something if I know I haven’t paid for it. Call me square, call me stupid, but since I would actually quite like to work in the entertainment industry I would like to think that some people out there pay for things from time to time.

I saw an argument about this on the YouTube comments recently, someone in the video had said something very similar to my statement above and one commenter took offence. “Yarrr! It be alright for ye,” said the swashbuckler in not quite so many words, “but I need to save me money so I can eat!” I was a hair’s breadth from replying, “So steal the food. It amounts to the same thing,” but my crippling apathy won out.

Why am I telling you this? Because last October a television series came out that I would have KILLED to see – but I didn’t. I waited. Everyone around told me they had seen it online and how great it was, but no. I needed to see it properly.

Almost an entire year later and I finally did it. I finally watched the exclusive Starz television series – Ash Vs Evil Dead. Having just watched the first episode on DVD (with my legs firmly crossed) I can officially say I am not disappointed.

So c’mon, tell us already – what happens?

From the creators of the classic Evil Dead series (which might possibly be brought up again before the end of the month…), Ash Vs Evil Dead takes place roughly 30 years after the original three movies. Ash Williams (Bruce Campbell), the prophesied hero, lives alone in a trailer park getting drunk, high and seducing women in seedy bars.

While on one of these nights out, Ash seduces a lonely woman at the bar and swiftly takes her up the back- bathroom stalls in the bar. While in the act, the woman suddenly appears as a demon from Ash’s past. He is stunned, but not quite stunned enough to stop.

Can I just say here, Bruce Campbell’s acting here is outstanding. While he can easily portray the sly, charming rogue – he really excels when showing fear or anger. The expression on his face when he is convinced to finish with the woman from the bar is enough to cause the first real loud out moment from me – the first of many.

On his fearful retreat back to his trailer, Ash checks on the Necronomicon – a spell book of pure evil, inked in blood and bound in human flesh. Inside, he finds a mostly empty baggy of weed and it all comes back to him. In another example of his seduction routine, Ash read aloud some ‘poetry’ to his stoned partner for the night. Poetry, that just may have summoned the dead spirits to return to the world of the living. 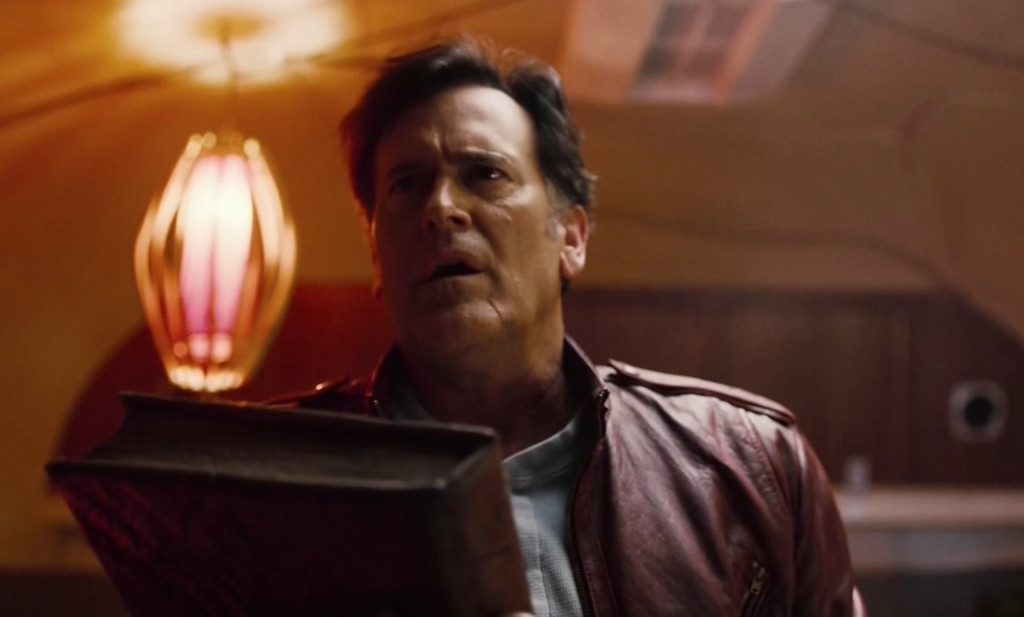 Back in town, police detective Amanda Fisher (Jill Marie Jones) is investigating a suspiciously creepy house with her partner – and discovers the girl from Ash’s poetry session, mossed and corrupted by the evil dead. The scene that follows is creepy, chilling and incredibly violent. It is pure Sam Raimi – and pure Evil Dead. Having been forced to murder the possessed girl, Amanda moves on to put down her possessed partner. 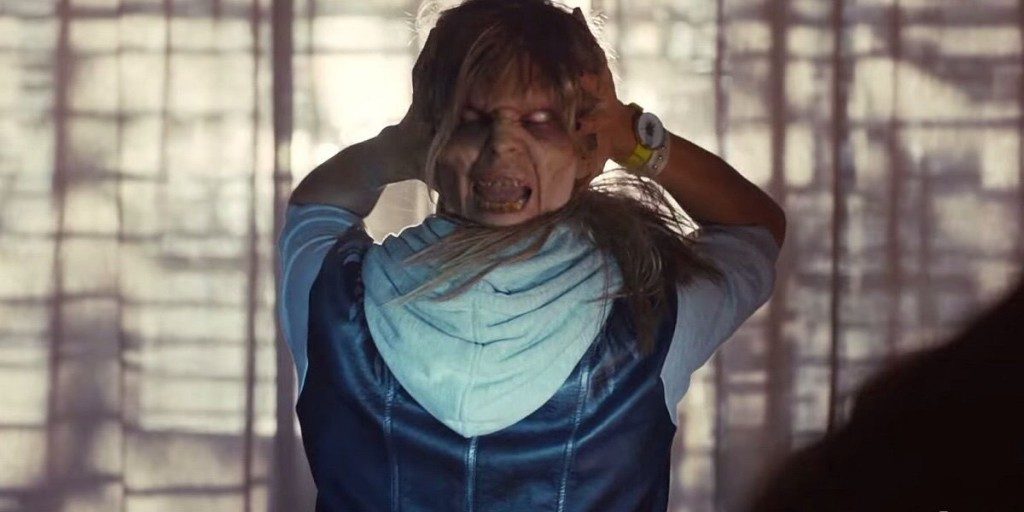 But not before the first deadite utters the words, “We know who you are!”. Oooo, plot!

Amanda is chilled by what she has witnessed and begins to see demonic faces on people in the town. She begins to wonder what was real and what must have been a nightmare. In the process, she meets a mysterious woman (played by Lucy Lawless) – who we all know must feature pretty heavily – although in what capacity, well that remains to be seen.

Ash reveals his past to co-worker Pablo (Ray Santiago) after an encounter in the ValueStop stock room and, despite Pablo’s protests, opts to run away and hide (in true Ash style) rather than face his destiny.

When Pablo and his not-girlfriend Kelly (Dana DeLorenzo) catch up with Ash in his trailer, the aged hero realises that he has no choice but to accept his fate as the badass chainsaw-wielding deadite slayer he was born to be…

Oh. My. God. Is this the greatest opening episode to a series ever, or am I just wearing my Sam Raimi fanboy goggles? Gloriously violent, and with Raimi’s signature slapstick style, this is the best possible way to relaunch the classic Evil Dead series.

I already mentioned Bruce’s performance is flawless – he was born for this role and in my opinion, has yet to surpass the character. The production itself is fantastic, bringing a real cinematic quality to the surprisingly short episode on the small screen. The music, too, really sets the tone. The music over the final credits alone had me grinning.

Let me be completely clear. There is only one word to describe this show.

There’s not much I can post here without spoiling this show. To experience it, you’re going to have to just watch it yourself.

Thankfully FunnyOrDie.com has come to the rescue! (Strictly speaking it’s a promo for the seasons series, but pff whatever). Clicky the click thing to find out The Dangers Of Having A Chainsaw For A Hand. You’re welcome.