Dream Girls Can Be A Nightmare 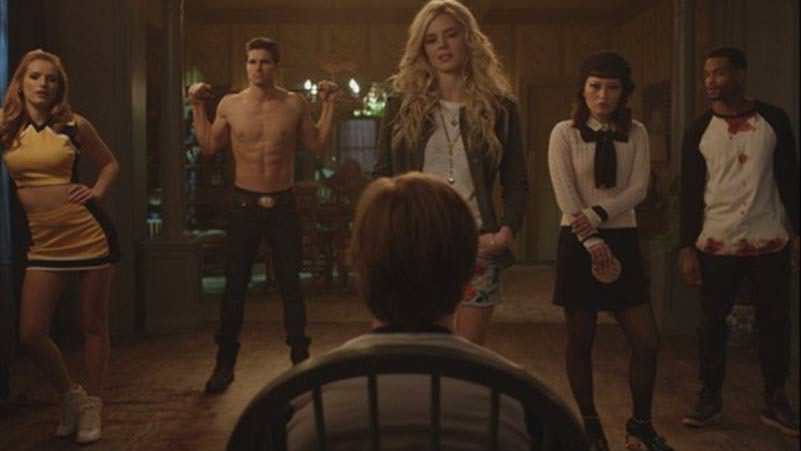 It’s not often that I accept recommendations from friends and family. There are, however, certain films and shows that slip under my stubborn reluctance to accept other people’s opinions. It’s not like I hadn’t heard of The Babysitter (2017) – it was on my radar from the day it was released on Netflix. I thought it looked like fun, but I have to admit it wasn’t exactly jabbing me for attention right away.

And then my phone started vibrating. Two, three- no, four messages from four completely different people, all asking the same question, “Have you seen The Babysitter yet??”

And I wasn’t disappointed.

Life, for Cole Johnson (Judah Lewis), isn’t easy. Terrified of the world around him, Cole presents as a sheepish nerd with little to him, except his endless phobias, obsession with remote control cars, and – of course – his regular babysitter Bee (Samara Weaving), who acts as much as his prepubescent fantasy as she is his guardian and confidant.

One weekend, Cole’s parents (played by Leslie Bibb and Ken Marino) decide to go away for an overnight hotel stay, leaving Cole in the care of Bee. Convinced by his best friend Melanie (Emily Alyn Lind), Cole is anxious to see what Bee gets up to after he goes to bed – and whether or not she sneaks a boyfriend in under the cover of night. Sure enough, after a day and night of fun, games, swimming pool antics and a cheeky shot of alcohol before bed (which Cole tosses away to try and impress Bee), Cole is tucked in to bed.

Later, while texting Melanie, he hears the arrival of several guests. Suspecting an orgy, Cole sneaks out onto the landing and witnesses a game of Truth or Dare between Bee and a group of similarly sexy people. There’s Max, the jock (Robbie Amell); Allison the cheerleader (Bella Thorne); Sonya the goth (Hana Mae Lee); splatter magnet John (Andrew Bachelor), and, finally, the dorky and fish-out-of-water Samuel (Doug Haley). After Bee is dared to kiss everyone in the room – much to Cole’s enjoyment – Samuel begins to panic. He is out of his element, but is soothed and calmed by the group as Bee leans in to provide his first kiss. He is in love.

Then he is stabbed in the skull by Bee, dual wielding large sacrificial knives.

The group then begin to collect the flowing blood in golden amulets, before Bee produces a suspiciously Necronomicon-esque book of spells and ritual. So, you might think finding out your babysitter and her friends are part of a demonic cult might be bad – but it gets worse. The next ingredient on their list is the blood of an innocent – who they believe is currently sleeping peacefully in his room.

As the group ascend, Cole is able to quickly report the murder to the police, but must pretend to be asleep as Bee leads the cult into his room. Believing him to have been knocked unconscious by all the drugs she had laced his shot of alcohol with, Bee is quite open with her intentions while Cole must pretend to remain sleeping – despite his fear of needles. This terrifying ordeal kickstarts a cat-and-mouse chase throughout the house, with Cole forced to confront his fears and phobias as he turns the tables on each of the twisted teens.

As he begins to fight back, through accident, dumb luck and thorough knowledge of aerodynamics, Cole is able to defend himself amidst a blood bath of epic proportions. With the stakes raising at each kill, until finally Cole must make the decision that will change him forever.

It’s about time he didn’t need a babysitter any more.

Directed by McG, The Babysitter was written by Brian Duffield many years ago, and sat on a Black List of the best unproduced screenplays since 2014 – joining one of many truly excellent screenplays that have followed the same path.

Because, seriously, the script here is phenomenal. Sharp, witty dialogue packed full of popular culture gags flow off the page. What’s more, every action, gag and scene established in the first act pays off beautifully by the end – completing the circle in a genuinely satisfying way. Honestly, if the storytelling part of your brain could blush, this would do it. There is, of course, some gloriously gruesome kills throughout – and some seriously laugh out loud gags. It’s wonderful.

The direction by McG is brilliant in context, with some great child’s-eye perspective shots (such as staring through the banister at the top of the stairs) and some perfectly timed captions blazing across the screen where necessary. It was reminiscent of the style of Edgar Wright’s Scott Pilgrim vs The World (2010) or Joseph Kahn’s Detention (2011), although, admittedly, without the edge of punch of these films.

Never-the-less, The Babysitter is an incredibly fun movie. The soundtrack is excellent, and the wonderfully retro visuals make it a must watch for me. You should definitely stick this on your Netflix list.