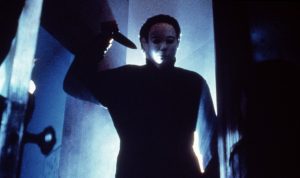 There’s an argument to be had here to finish a 31-day spookathon with the classic Halloween (1978). It is, after all, the quintessential Halloween film – the latex face that launched a thousand remakes and rip offs. But, see, that’s exactly the point.

I plan on watching and reviewing some weird, some wonderful, and some downright awful films over the next few weeks, but I can guarantee now that whatever films I choose to review, there will be some very obvious inspirations drawn from John Carpenter’s story in the mix.

But what the hell am I talking about?

Originally titled “The Babysitter Murders,” Halloween marks the first foray into the horror genre by writer-director-composer John Carpenter, whose style and soundtrack (composed by himself in less than 3 days) in many ways transcends the story into something… else.

Let me put that another way, this film scared the living shit out of me when I first watched this (admittedly at too early an age).

One reason above many, is that the atmosphere sticks with you long after the film is over. The repetitive music puts you in that place, wherever you might hear it. Combined with some genuinely creepy set pieces, Halloween may seem dated – but it tells a story that can give goosebumps to even the most hardened millennial scumbag. 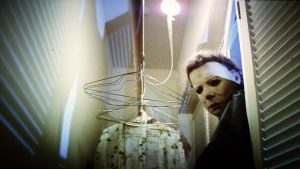 I don’t plan on detailing the plot, only to cover the general synopsis here. If you really want a point by point breakdown of the film then I highly suggest you sod off and watch the actual film. I mean, it’s not expensive. It’s 38 years old, for God’s sake.

But anyway, yes. The story opens in Haddonfield, Illinois, 1963. A six year old boy witnesses his older sister up to no good with her boyfriend, and proceeds to creep into her room and slaughter her shortly before their parents show up.

I mention this, as the lingering shot of the parents staring silently at a knife-wielding child is one that has been stuck in my head for years. It’s about as close to art house as I care to venture.

Fifteen years later, on the night before Halloween, Dr. Samuel Loomis (Donald Pleasence) is en route to the asylum that the boy – Michael – now resides in. On arrival, they find that several patients have escaped their wards and are now wandering the grounds. The car is attacked – and stolen – by an unseen male figure who is a surprisingly good driver.

Back in Haddonfield, we are introduced to Laurie Strode (Jamie Lee Curtis, making her cinematic debut) and her friends, who have babysitting jobs for Halloween. They earn the attention of a mysterious figure, dressed in a mask and overalls, who begins to stalk them throughout the town.

This culminates on Halloween itself, when Laurie and her friends are separated in different houses and are so preoccupied with getting laid and meeting their boyfriends that they do not notice the sinister figure behind them… 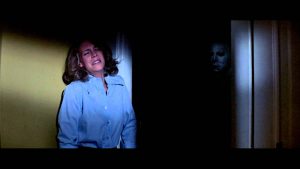 Unlike her friends, Laurie appears to be a virgin, undistracted by boyfriends or the desire to party, and this isolation from her peers is what saves her. I believe I’m right in saying this is the origin of the virgin heroine surviving – a trope that still lingers. This is, according to writers John Carpenter and Debra Hill – totally incidental. Laurie’s survival is more about her being in the right place at the right time.

That said, Laurie did seem to want to make Michael’s life as easy as possible. One note to take away from Halloween, if you’re under attack by an unstoppable, unrecognisable terror who is clearly evil, DON’T DROP THE SODDING KNIFE.

But hey, that probably only makes sense if you’ve seen the film.

Halloween is what it is. It is a tense, atmospheric (read: slow), horror movie that pitches young, innocent girls against the embodiment of pure evil. Scenes linger on long shots, characters find ways to make you wish they were already dead and the theme is so persistent throughout the film, that you wonder if you’ll ever be able to hear another piece of music again. Also, Donald Pleasance stands in a bush for an hour frightening young boys.

It is the grandfather of every slasher-flick and the prototype to modern horror. Considering the shoestring budget, tight filming schedule and inexperienced cast and crew, it is arguably one of the most successful – and impressive – independent films of all time. If you want to make films, I highly suggest you read up on the techniques that went intro this production. It. Will. Blow. Your. Mind. 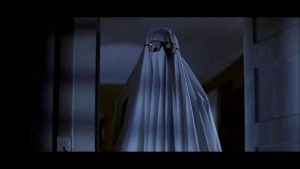 Check out this great video from last Halloween by the amazing Rob Scallon. It will certainly get you in the mood.

Yours, A P Tyler.