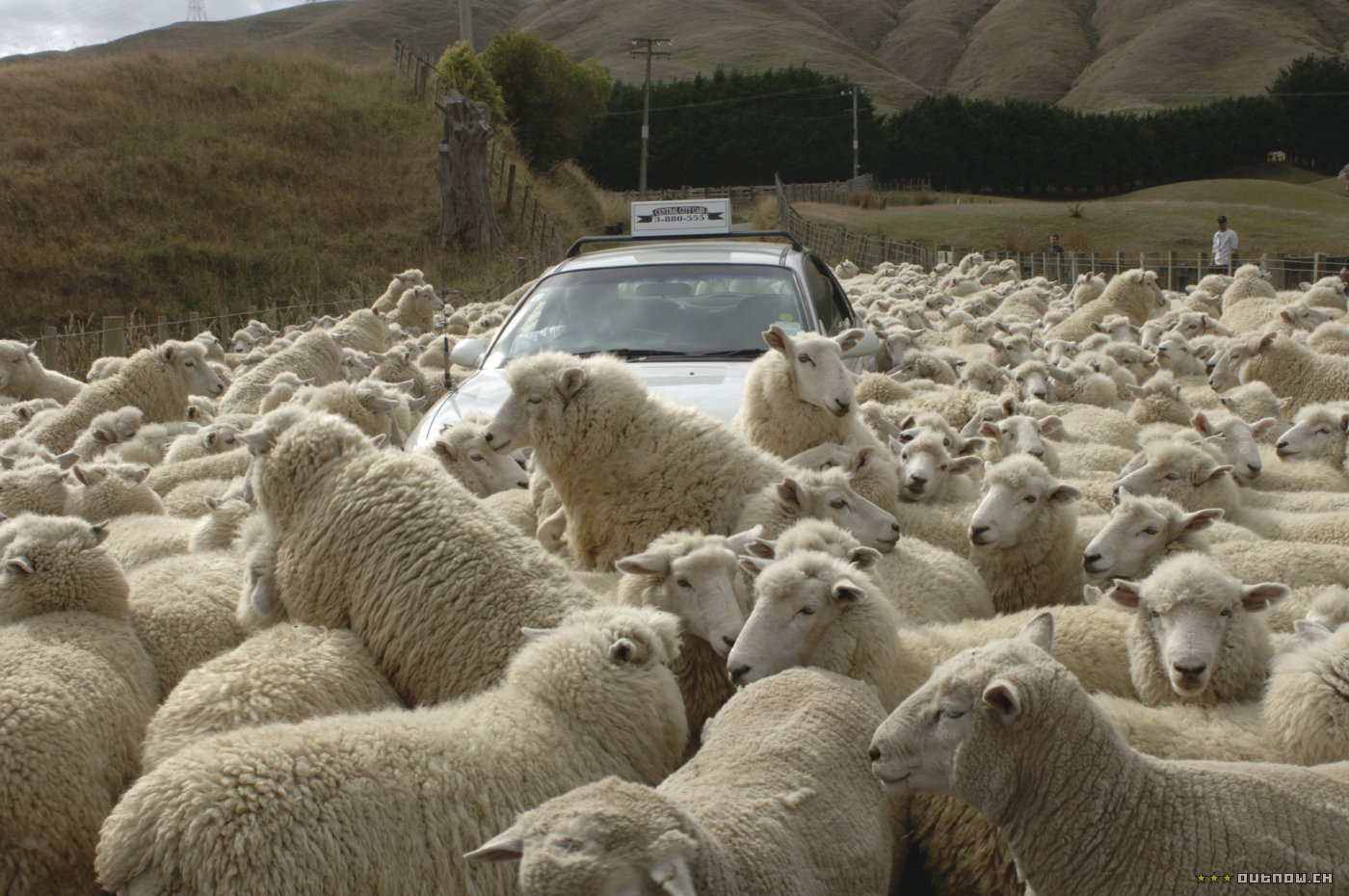 I woke up this morning to find a gloriously sunny day waiting for me outside my window. Honestly, it’s hard enough to get into the Halloween spirit over here in the UK without the weather trying to force you into t-shirts, shorts and sandals at the most inconvenient time. We’ve had whole summers that were less sunny than today, the 2nd October.

But whatever. Determined, I scanned my shelves and online libraries for a suitably sunny and lovely horror movie and stumbled on one I’ve been desperate to watch since it came out. Black Sheep (2006).

This New Zealand horror movie is the debut of writer-director Jonathan King (no, not the bad one) and came out to muted audiences in the UK back in 2008. I feel like I may have been too poor or too drunk to make it out to the cinema at the time (I was in art college, after all), but having watched it now, I regret all my decisions.

If you can’t be bothered to read this, head over to Netflix immediately and find Black Sheep. It. Is. Glorious.

Like a rabid cross breed of early Peter Jackson and Army Of Darkness-era Sam Raimi, Black Sheep (2006) tells the story of Henry Oldfield (Nick Fenton) returning to his family farm after moving away following a tragic accident involving his father and a very high fall, the result of which left him with a crippling phobia of sheep.

When he returns to sell his share of the farm, he finds his older brother Angus (Peter Feeney) has become a much-hated corrupt businessman in the area. While out re-introducing himself to the countryside he grew up on, Henry and old friend Tucker (Tammy Davis) stumble upon a vegetarian eco-terrorist by the name of Experience (Danielle Mason), who has lost her companion while fleeing a group of scientists after stealing a mutated lamb from the hidden genetic laboratory (trying to breed the perfect Super Sheep, naturally) on the land.

Yeah, see, that’s what I love. The twists and turns in this film had me laughing and cringing the whole way through. The crippled, mutated lamb that emerges from its tank is gloriously deformed and horrific. Much like the Zombie Baby in Peter Jackson’s Braindead (1992), the rotating jaw and puppet horror launches itself at the eco-terrorist Grant (Oliver Driver), tearing off his ear in the most cartoonishly gruesome effect. I love it.

What follows is a growing sense of dread, as the escaped lamb’s bite causes every sheep to become evil, carnivorous killing machines. The infected sheep grow in number, with their vacant stares and increasing numbers emulating the growing horror in Birds (1963) as they start to turn on the human inhabitants of the land. 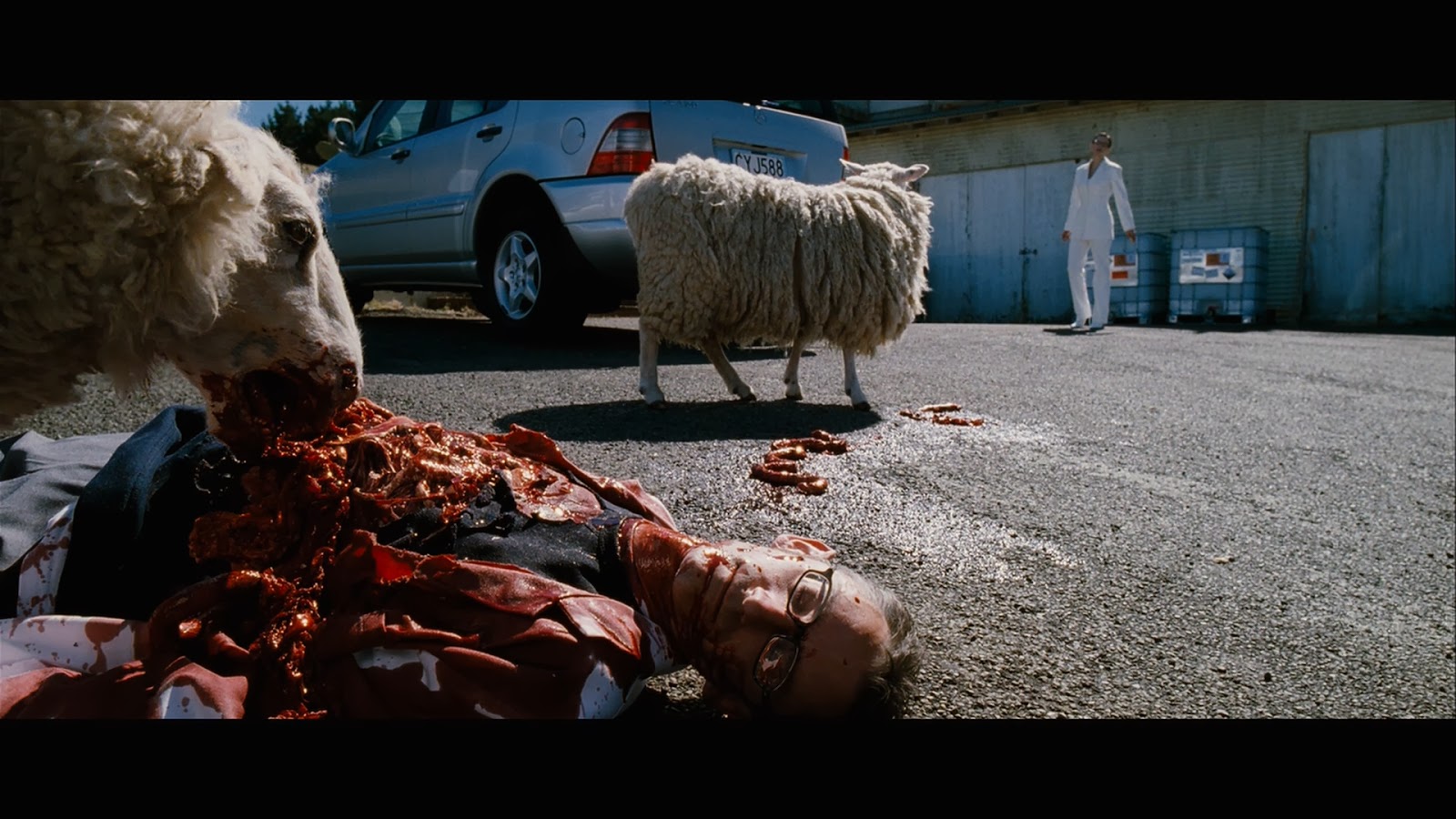 As Angus and Experience begin to uncover the cause of the problems, the stakes raise higher and higher. The body horror of the infection’s final stages is truly something to admire, itself seemingly referencing the classic transformation of An American Werewolf In London (1981). Again, I won’t spoil anything in these reviews, however I will say that the effects in this production are both impressive and squicky of the highest order.

If I had to complain about anything, it would be that occasionally the moments where characters stare blankly at each other when confronted with something can drag out a scene a little too much, slowing the pace of an otherwise well executed set piece.

Likewise, some of the body horror scenes are a bit underwhelming, as we see what happens to the main villain way, way earlier in the film. We don’t get to see as much detail, true, but I think it would have been nice to save the real thing for the climax of the story.

This, incidentally, is a very minor nitpick for a truly great slice of low budget horror. It would be easy to just call it a parody of all of the horrors listed above, but I think it has enough originality to sell itself on its own merits. It certainly isn’t short of some excellent one-liners and throwaway gags, including a great little moment when the hero discovers that mint sauce burns them like holy water. I love it.

Looking him up, Jonathan King doesn’t seem to have done all that much since Black Sheep (2006). I haven’t looked yet, but I’m very curious to see what else he has done. He certainly has a passion for his craft. The spirit of Peter Jackson lives on.

Check out this behind the scenes featurette to get to grips with this film. Amazing.