From dark comedy to bleak misery, today I turn to a rare gem of a modern horror movie. Written and directed by Ted Geoghegan, We Are Still Here (2015) was one of two runaway successes in the horror genre last year. Although somehow it managed to completely go over my head at the time.

I must admit, when I first saw the cover art for We Are Still Here (2015) I laughed. I laughed loud and I laughed hard. Then I remembered I was standing in the DVD aisle in Stevenage Town Centre’s Tesco and realised there was nothing really to be happy about in my life at that time.

But that initial burst of joy came not from the cover art, or the blurb, but from the title. We Are Still Here conjures an image of joyous new homeowners bounding into the living room, only to be stopped in their tracks by a depressed spirit sighing, “We’re still here. God. It’s like you don’t even listen to me.”

It was funnier in my head. Gimme a break, I was in Stevenage.

But what is this film all about?

Shortly after moving in, the couple begin to feel uneasy in the property. Particularly the basement, which feels unnaturally warm at all times of the day. The shadows in the corner of the room are, go unnoticed. For a while. 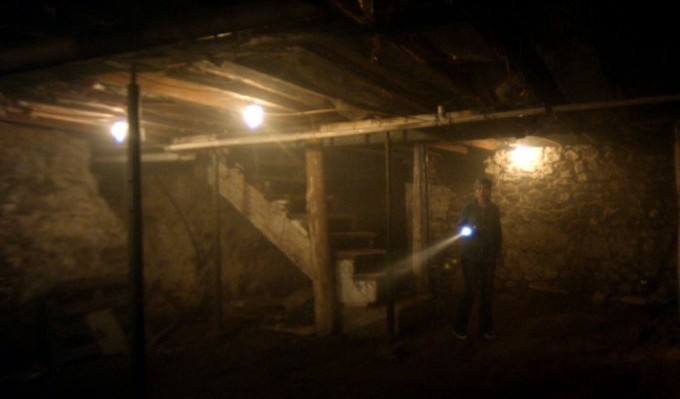 The creep factor steps up a notice when a middle aged couple pass by the house and, noticing the lights on inside, decide to call in at their new neighbours. They begin to reel off the history of the house, revealing that the former owner dealt in corpses and committed suicide during the 1880s. Naturally this causes some unease in Anne and Paul, with Anne admitting that she can feel a presence in the home – suspecting that it is their late son that remains with them.

Later, Anne and Paul invite May (Lisa Marie) and Jacob Lewis (Larry Fessenden) to stay. As spiritualists, Anne hopes they may be able to help reach the other side – and speak with Bobby.

While the two couples are out for dinner, the Lewis’ son Harry (Michael Patrick) and his girlfriend Daniella (Kelsea Dakota) arrive at the house. Despite the film being set in the 1970s, I have to add that the pair are distractingly trendy millennial performers who come across more as scumbag hipsters than genuine kids from the time.

Daniella is also surprisingly genre-savvy, although her foresight only lasts so long.

As the house spirits grow in strength and ferocity, the growing unease is palpable. Dark visions of the house’s past appear to the tenants, while a dark conspiracy reveals itself to the audience.

I had no idea what to expect coming into this film, but boy was I pleasantly surprised. Not only is the story set in the late 70s, but much of the cinematography appears to be a celebration of classic horror. Comparisons to The Amityville Horror (1979) would be easy to make, but truth be told, there is a lot more going on here.

If nothing else, We Are Still Here (2015) comes across as a more mature horror movie. Older characters fight against the dark past of an old town, while the young are treated as disposable and irritating. The emphasis is not on teenage angst, but of family and dealing with the past.

Also worth noting is the incredible use of sound. Dark, creeping tones bubble away beneath otherwise fairly ordinary scenes of family life, building on the audience’s unease. The soundtrack by Wojciech Golczewski also succeeds in building on the dark atmosphere. 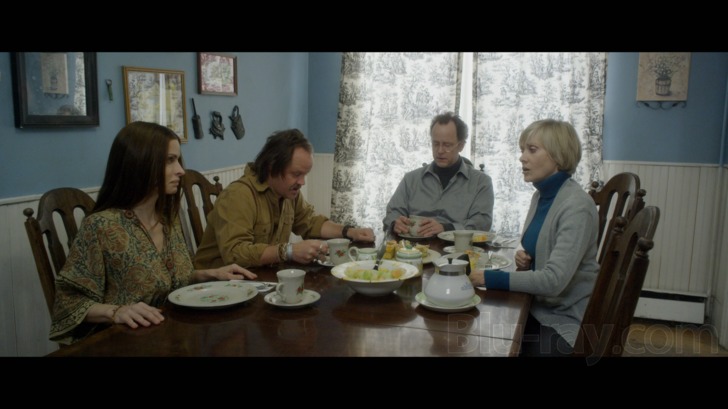 As if this wasn’t enough, the special effects are something to admire. Particularly in the final act. You simply have to watch this film.

If I had to have a complaint, it is a bit of a shame that the growing dread that develops in the first act ends somewhat abruptly. This was obviously the point, but I still can’t help but feel a bit short changed by this.

But what are you still hanging around here for? Head to Amazon Prime and watch it now!

I mentioned the soundtrack very briefly. Beyond the great OST, there are some wonderful songs performed by Wooden Indian in this film. Most notably, “Gas Station Glow” which plays over the end credits. Check it out here: