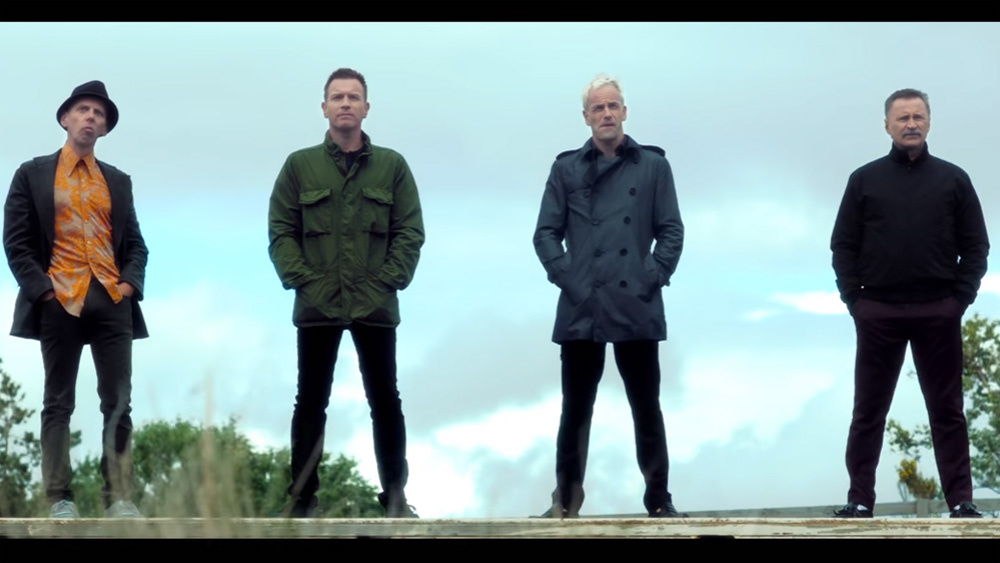 Choose a three piece suite on hire purchase in a range of fucking fabrics.

Choose DIY and wondering who the fuck you are on a Sunday morning.

Choose rotting away at the end of it all, pissing your last in a miserable home, nothing more than an embarrassment to the selfish, fucked-up brats you have spawned to replace yourselves.

But why would I want to do a thing like that?

I chose not to choose life: I chose something else.

There are no reasons.

Who needs reasons when you’ve got heroin?

For the longest time, I could recite the above from memory. From memory. I may not have been able to cook, I may not have had the capacity to know my girlfriend’s telephone number – I barely knew my own – but I knew the opening to Danny Boyle’s 1996 masterpiece, Trainspotting. I don’t even know why this was the case, it might be thanks to only having a handful of VHS tapes in the house. Or possibly because my bootleg version of Iggy Pop’s Lust for Life had the clip mixed in, or possibly because I owned a poster with the full quote when I was at University.

Yes, I am a walking cliche, thank you for contributing.

The point I’m making is that despite not being of the age to really appreciate Trainspotting when it was first out, the echoes it made in the British film industry are hard to ignore. Everyone knew Trainspotting. Everyone knew Renton (Ewan McGregor), Spud (Ewan Bremner), Sick Boy (Johnny Lee Miller) and Franco (Robert Carlyle) like they were their own mates. In them, Danny Boyle’s adaptation of the Irvine Welsh book told a story of youth rebellion and feelings of loss in a miserable society. In the background, the washed out, cold misery of a post-industrial Edinburgh hung like a shadow.

“I hate being Scottish.” rants Renton, “We’re the lowest of the fucking low, the scum of the earth, the most wretched, servile, miserable, pathetic trash that was ever shat into civilisation.”

With so much to look forward to, it’s no wonder finding the next hit had so much appeal to our cast of ne’er-do-wells. What follows is a tale of misadventure, betrayal, greed, grief and edge-of-the-seat-bed-wetting-terror that concludes with Renton on the run from his mates, to the great wide world beyond. A perfect end to a disturbingly perfect film.

Fast forward to January 2017, past teaser trailers and cinematic trailers and inevitable social media buzz, and it’s here. T2 Trainspotting, the sequel to the film placed 10th in the BFI’s Top 100 British Films Of All Time, and the best Scottish film of all time. These are some shoes to fill.

So… Onto The Sequel

Twenty years after the events of the first film and Edinburgh has changed. No longer the hollowed out, run down old city as it appeared in the original. Everything now shines with glass and promise, the signature tower blocks stand ready for demolition and new arrivals are greeted by smiling Slovenian girls in tartan.

The glimpses we see of wider society show that the people of Edinburgh are no longer run down and depressed, they are modern, trendy, optimistic. A far cry from the disaffected years of the early 90s. Yet, amongst this upbeat slice of Scottish life, we find our tearaway protagonists still existing on the fringes of society.

Then, amongst this set up, Renton appears again. Back to repay his debts and gain some slice of closure on his betrayal so long ago. Having managed to ‘make it’ abroad, Renton is in the best shape of the group. He even acts well-settled and reserved, as if he has matured as a man. This act holds up about as long as it takes before Sick Boy swings a pool cue at him.

Renton’s actions, naturally, haven’t been forgiven in the twenty years since he’s been gone. His composure is lost as he ducks and weaves, throwing bottles and desperately covering himself from the unending blows from his oldest mate – in this moment, we begin to see the man we knew so long ago.

The Boys Are Back In Town

As the action unfolds, the loose story is held together with some truly excellent character acting and dialogue. We see Spud’s gradual steps into the life he has denied himself and we see Sick Boy’s manipulative mind at work and play as he re-connects with his oldest friend, waiting for the moment to betray him and finally get his revenge on the man that ran out on him so long ago. 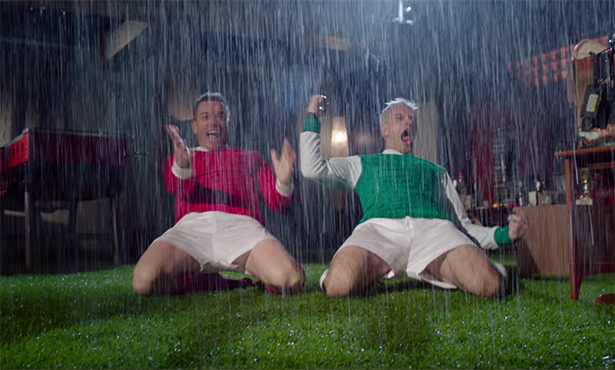 Unusually for a belated film sequel such as this, nostalgia not only plays a pivotal role in the story, but it is openly lampshaded throughout. One scene, in particular, brings together Renton and Sick Boy in a full cocaine-fuelled geek-out on the world of their youth – the 1970s – to a bemused 20-something who watches from the couch. This, together with short 8mm film footage of the boys from childhood, to adolescence, to even showing clips from the first film, stands out against the crisp lines of the modern day – visually portraying the passage of time and loss of innocence.

Then, of course, there’s the music. Trainspotting was always known for its music, and T2 doesn’t let the side down. Right now I’m hooked on Whitest Boy On The Beach – Fat White Family. Heavy beats and remixes of the classic themes mesh with the older tunes perfectly, with young revellers dancing to the music of the 80s in full retro gear, watched by the boys who saw it all the first time round.

This all worked for me. I loved every second of it. However, if I had to find a complaint it would be that perhaps – just perhaps – the story was driven by a degree of excessive navel-gazing. Though, much to the film’s credit, this was often pointed out and ridiculed by the characters themselves. Wasn’t it all so much better back then? You know, when we sold heroin to a mate who ended up dying alone, or failed in our basic task of supervising infants in our care?

While all this is happening, there is of course the matter of Franco. Driven by hate and anger, Franco is not a man to be trifled with. His pursuit of Renton is nail biting and tense, and so much worse when you consider that Renton perhaps deserves anything that comes to him. He is our hero, but let’s face it – he does have a bit of a smug face, doesn’t he? 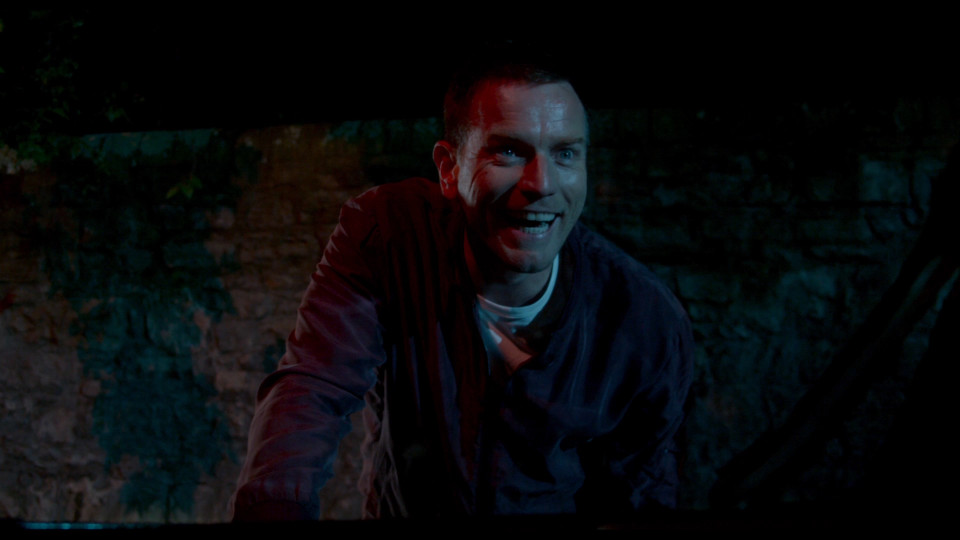 I’ve just spotted the word count, so I’m going to round this blog off by saying that T2 is a masterpiece in visual character development (aided in no small way by the world-class performances of the cast), telling a story through natural and honest dialogue. The script makes it possible to laugh out loud one moment, then wipe away a small tear in the next (those father-son scenes always get me…), while holding onto the edge of your seat with clenched buttocks in the scene to follow.

Some of the visuals genuinely stand out to me – particular that one bit when Renton reunites with Spud (no spoilers, no worries). Although the repeated fingertip-on-doorbell stuck out to me as a little needless, referencing the original film a little too obviously. The 1990s style of cinematography that froze the frame at the end of a bout of action, however, stuck the film’s heel truly in the retro camp. This I enjoyed.

The film, however, diverts from the original in one major way: Realism. The Trainspotting of 1996 sold a story of misery and wasn’t afraid to confront the world as it was. This is perhaps more a reflection on modern filmmaking generally, but everything felt a little too Hollywood in the modern day. To put it simply, I walked away from T2 really wanting to visit Edinburgh. I’m sure it’s a lovely city, but is this really what you want to be feeling after watching a film like this?

Still, I’ll leave The Guardian to ponder this point.

And now, because why not, let me finish with Renton’s updated speech for the new generation:

And choose watching history repeat itself.

And choose the same for your kids, only worse, and smother the pain with an unknown dose of an unknown drug made in somebody’s kitchen

And then… take a deep breath You’re an addict, so be addicted Just be addicted to something else Choose the ones you love.

(Taken from the trailer, I can say for a fact that it is different in the film. You’ll just have to go and watch it, won’t you?)