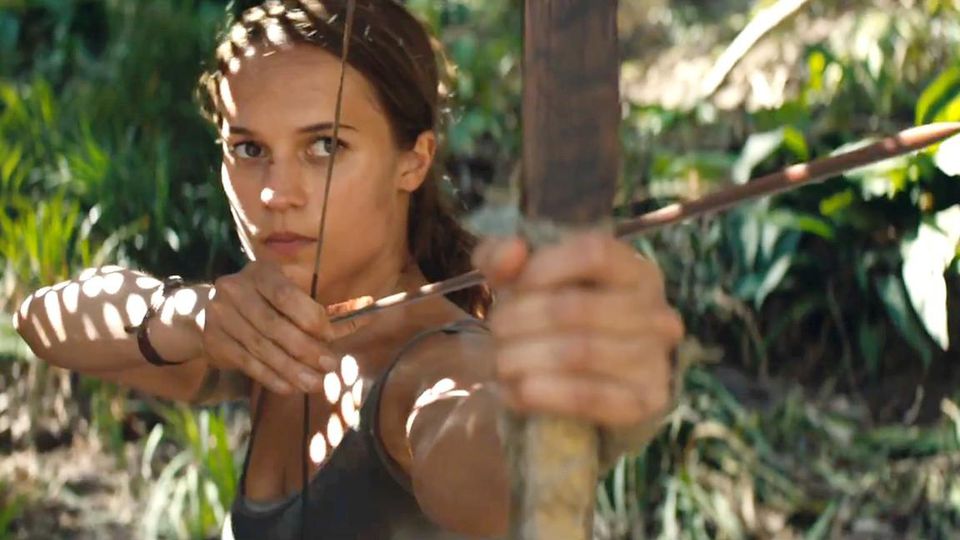 All myths are foundations of reality.

I had a girlfriend who absolutely loved playing Tomb Raider as a child, citing the infamous locking-the-butler-in-the-freezer as a genuine highlight. This worked out well for me, as back in the dark JSA days of 2013 when we first got together, she went ahead and bought the brand new Tomb Raider for us to play together. A total reboot, this version of the game saw a far more realistic Lara Croft thrown into the unknown on an island seemingly inhabiting the space between Lost and Uncharted. The success of this has spawned one sequel, with another in development, and, subsequently, inspired the brand new movie that has just come out, titled simply Tomb Raider (2018).

Written by Geneva Robertson-Dworet and Alastair Siddons, and directed by Roar Uthaug, Tomb Raider opens somewhere in London where we are introduced to Lara Croft (Alicia Vikander), a young woman who lives approximately one apple above the breadline. When she isn’t training in the boxing ring, she’s competing against her peers from her bike saddle as she earns her living as a bike courier.

Desperate for money, Lara overhears her hipster peers discussing a race, called a “fox hunt” where one biker is chased through the streets of London by the rest of the cyclists, a dripping can of paint trailing behind them. Whoever catches the “fox” wins the pot, and if the paint runs out, the fox bags a cool £500. Unable to resist the offer, Lara talks her way into becoming the fox, and is soon chased through the streets of London, twisting, turning, using her physical and mental strength to slip through the fingers of her competitors again and again.

We see that Lara is determined, strong, resourceful and able to think on her feet. Until she gets run over by the police car, that is.

It’s fairly obvious at this point that Lara isn’t all that she seems at this point. Her peers even acknowledge it, sensing that she is from a different world entirely – and we soon see why. Ana Miller (Kristen Scott Thomas), an older woman with clear connections to Lara’s family arrives at the police station to collect her. You see, Lara has been having a bit of a break, but now it’s time to come home and collect her inheritance. Quoting Lara’s late father, Ana manages to convince Lara to meet with her at the Croft Holdings building, where it is revealed that Lara’s father, Lord Richard Croft (Dominic West) has been missing for several years. So long in fact, that he has been declared dead – leaving his fortune to his only daughter, Lara.

Resistant to the idea of signing her father off as dead once and for all, Lara again hesitates – but is stunned to see the Solicitor (played by none other than Derek Jacobi) pull out a Japanese puzzle box, an heirloom meant for Lara on her father’s death. Lara is transfixed, explaining that her father had always left items like this around the manor. In no time at all, she opens the container and finds a key – and a note. This kickstarts a trail of breadcrumbs that lead her into a secret office hidden on the grounds of the Croft estate. Here, Lara discovers her father’s final mission – deep into the Devil’s Sea to find the tomb of the long lost Queen-Goddess Himiko, who was said to control the powers of life and death.

Selling an heirloom, the last of her belongings, Lara sets off to Hong Kong to pick up the trail of her father’s last journey. Here she hires Lu Ren (Daniel Wu), whose father had also gone missing pursuing Lord Croft’s mythical treasure, and in no time at all the pair are themselves deep in the Devil’s Sea, Ren’s ship Endurance being battered by the harsh waves. The… really harsh waves. The really really harsh waves.

Incidentally, this is about where the 2013 Tomb Raider video game begins. As Endurance begins to break up against the rocks of the deadly island of Yamatai, Lara becomes separated from Ren as the two of them leap into the dark, stormy waters. After a life and death struggle, Lara finds herself washed up on the beach, choking and spluttering, only to be approached by several figures and then – darkness. 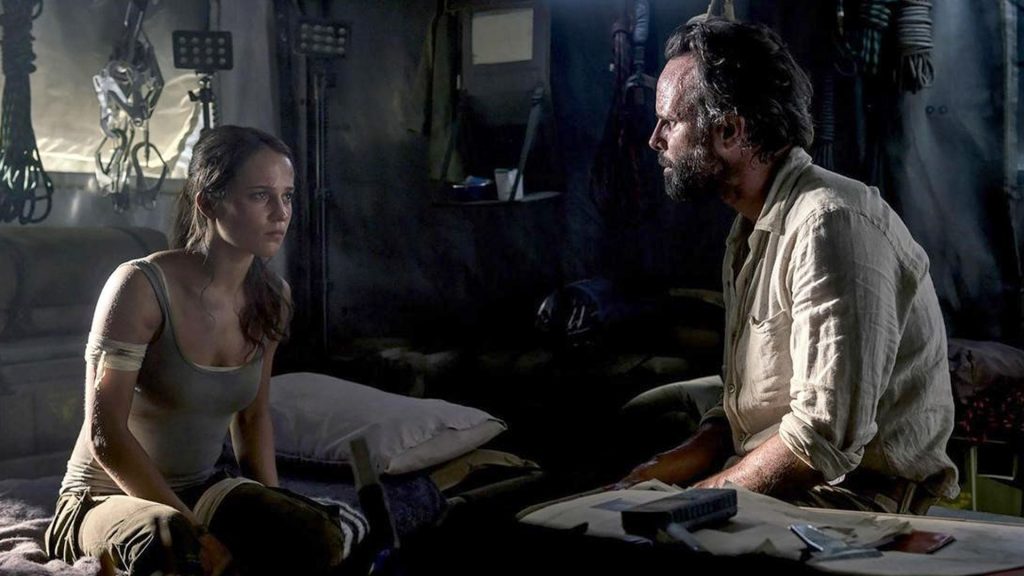 As she wakes, Lara discovers that she is in the presence of Mathias Vogel (Walton Goggins), the leader of an expedition to locate Himiko’s tomb for a shadowy organisation, known only as Trinity. Having enslaved a group of local fishermen, Vogel is becomingly increasingly desperate to find the tomb and leave the island – but now, thanks to Lara’s timely arrival (and her father’s research, which she kindly brought along for the journey).

Will Lara be able to escape the imprisonment of Vogel and his evil cronies? Will she manage to survive the trials of the island and stop Trinity from uncovering the mysteries of the island? Will she be doing awesome stunts and brutally murdering everyone she finds? Will the truth of her father’s final adventure come to light? 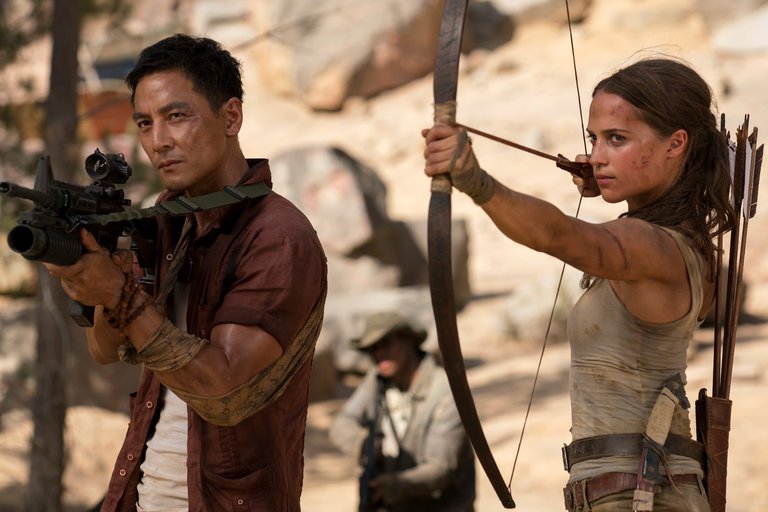 Some men are foolish.

Tomb Raider was never going to win over everybody. There’s far too much baggage for any video game movie at this point, you throw in a character who is well renowned for being an over sexualised cliche of polygon breasts and sassy soundbites, and you’re obviously in deep water – especially when the last take on the character was seemingly aimed exclusively at teenage boys.

To its credit, the 2018 film has certainly taken a well informed note from current popular culture. Rather than a sassy sexual fantasy, Lara legitimately feels like a real person. Rather than being aimed at teenage boys, this new Lara feels like one who might even inspire young women to get out there and get in true mercenary-murdering physical shape.

Indeed, the first half of the film really seems to try its hardest to set up this new Lara, and it must be said that Alicia Vikander played her extremely well. It’s no secret that she herself was a massive fan of the Tomb Raider series as she was growing up, and went the whole hog in getting herself in great physical shape prior to the role, even performing her own stunts on set.

The trouble is the plot, and the pacing. While the film took extraordinary lengths building the foundations of the character and the world she lives in, it just feels like everyone all got a bit too excited to get to the climax. This is where video game adaptations truly fall down. When you play a video game, you’re playing for a long time. In this particular story, you begin the game as Lara is washed up on a mysterious island. She crawls, she limps, she gradually builds her strength and skill to the point where she is able to confront her enemies. What’s more, we discover what’s going on around us through exploration, through visual storytelling.

You cut out this grind and you’re quit literally left with Lara deciding now she would kill everyone. She couldn’t even beat the girl in the boxing ring – now she’s murdering an army of mercenaries. I get that this is progression, but maaaaaan, I just stopped caring. At one point, I let my mind wander to a comparable sequence in the second act to a similar one in Indiana Jones And The Last Crusade (1989).

I know this is a cruel comparison to make, but I couldn’t help but ponder all the stuff that was happening for Indie and co. to get to the final temple. Tomb Raider, on the other hand, just sort of turned up and did the thing to get to the thing, in order to have the fight that ended the thing. Yeah. That’s all you’re getting.

But, look, I don’t want to hate on it entirely. Nick Frost is always welcome on the big screen as far as I’m concerned, and Junkie XL’s work on the soundtrack is flawless, as ever. I don’t know. It all just left a sour taste of cash-grab in my mouth. But hey, what can you do?

Except for just playing the game, anyway.