Every dead body that is not exterminated becomes one of them. It gets up and kills! The people it kills, get up and kill! 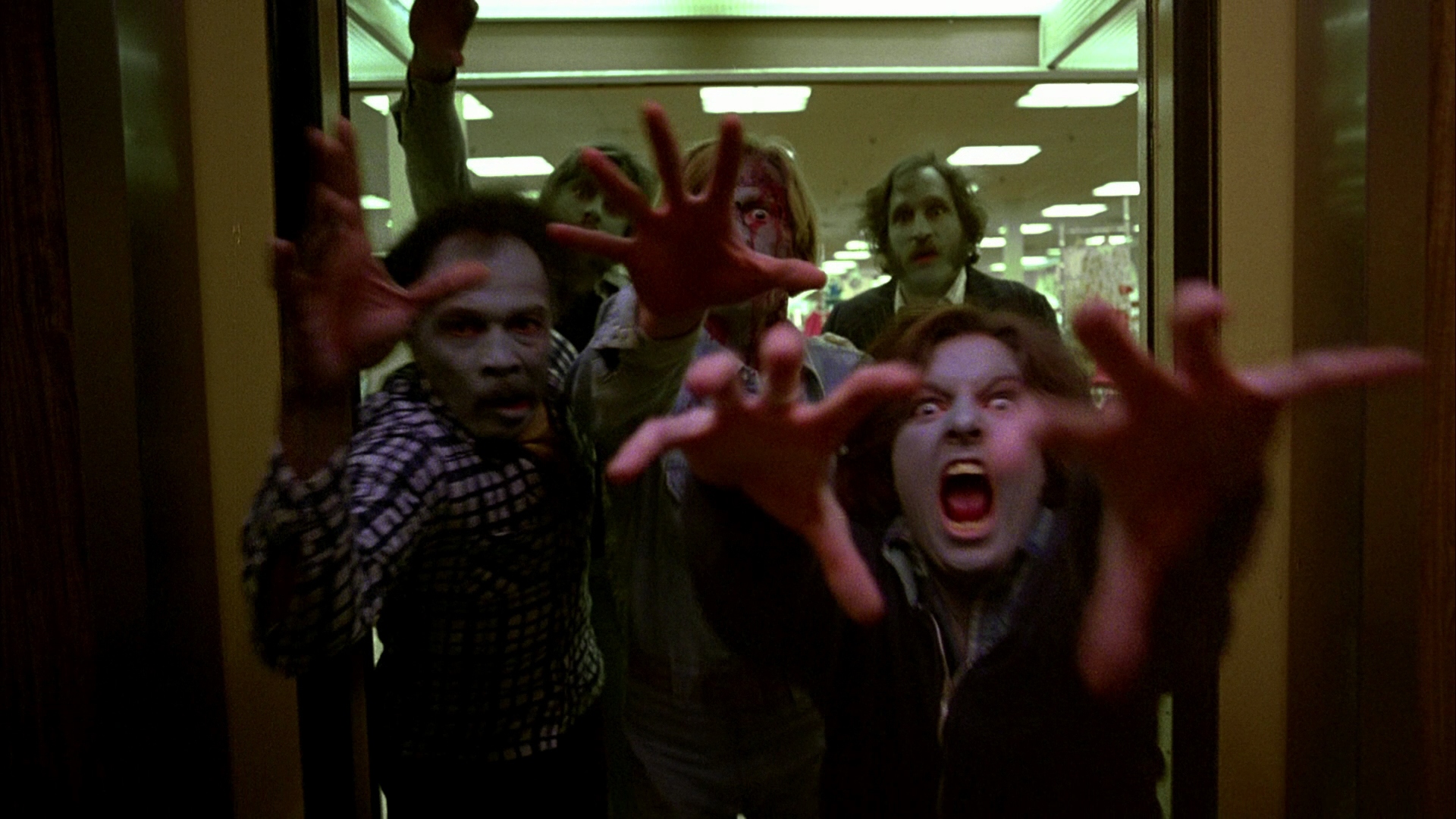 I’m sick of zombies. Truly, I am. They’ve been overdone, overplayed and, the most depressing of all, they’re just portrayed so lazily. Imitation of imitations have now existed for so long, that the modern zombie story is so devoid of, for want of a better word, art. They exist simply to act as the monster everyone recognises. They are treated as mobile target practice, with whole movie and game franchises built on being able to dismember the shuffling dead.

But this wasn’t always the case. When George A. Romero released Night Of The Living Dead (1968), he managed to create an iconic movie monster – but, what’s more, it had a point behind it. Like much of Romero’s early work, it was a statement about the wider world – particularly the tensions around society and, as it turned out – whether coincidence or not – the issue of race.

Ten years later, and Romero returned to his Living Dead series with the 1978 film Dawn Of The Dead. While Night succeeded in establishing the flesh eating undead as a timeless villain, Dawn essentially laid the groundwork for every post apocalyptic film that would follow. Its success and popularity remains as present now, as it did then – despite how hard it is to find a damn copy of the DVD, thanks to all sorts of ridiculous copyright claims.

Somewhere in Philadelphia, a television studio is in chaos. Three weeks into a mysterious phenomenon, experts and television personalities argue over the facts – no one understands what is happening, nor what they can do about it. Reports of the population being wiped out by those that have died and then came back to kill again are treated with derision, while social order and civilisation collapses around them. As they go on to report, rural communities are defending themselves, while urban populations are simply being overrun.

Amidst the confusion, two members of staff – Fran Parker (Gaylen Ross) and Stephen “Flyboy” Andrews (David Emge) – plot to steal the studio’s traffic helicopter to escape the city and, as they put it, survive.

In another part of the city, a Police SWAT Team gather at a housing project, set to crack down on an unruly community that refuses to hand their dead to the National Guard for disposal. Amongst them, Roger “Trooper” DiMarco (Scott Reiniger). As they are attacked by the residents, the SWAT team raid the project – uncovering apartments full of the shuffling dead, as well as whole rooms in the basement full of the deceased. Roger eventually meets with another SWAT Officer, Peter Washington (Ken Foree), and the two partner up. As they clear out the project, Roger tells Peter of his friends’ plan to leave the city and suggests Peter join them.

Later that night, Peter and Roger meet with Fran and Stephen – and the group ascend in the helicopter. We follow their journey, uncovering more of the disaster as we witness the rural communities bound together – as we did in Night Of The Living Dead (1968). Funny, it’s sequences like this that really make you understand how timeless works such as this are – the faint tone of disgust as Peter watches the rednecks enjoy their sport could easily feature in a film now, with the current climate on gun control.

But that’s by the by. Eventually, the group realise that they’re getting desperate for food, water and actual rest, and land the helicopter at a nearby shopping mall. They break in for supplies, but quickly release that, despite the mall being occupied by hundreds of the undead, this is a chance to hole up and create a sanctuary. 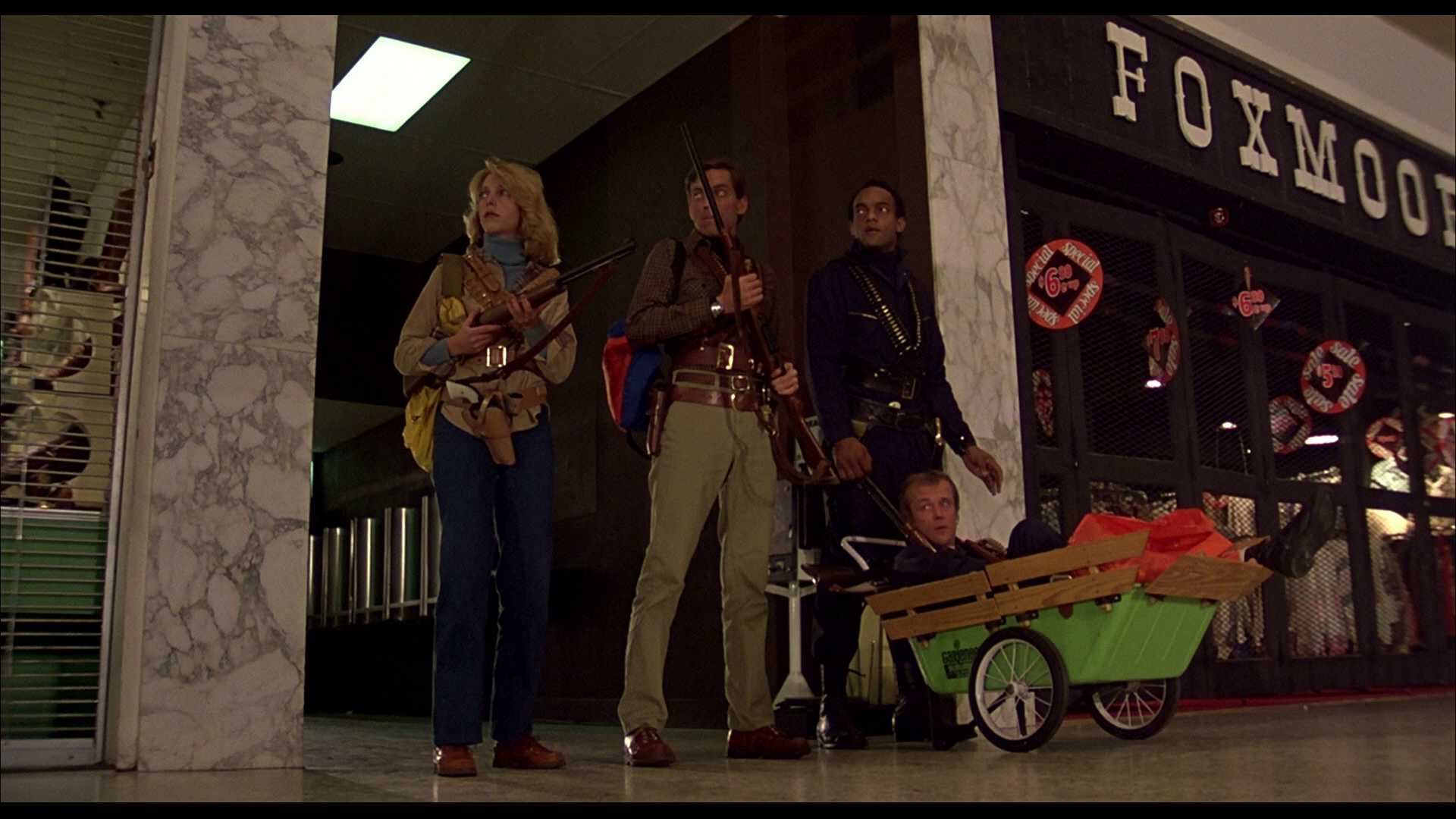 The group then set about establishing themselves in the mall, eventually sealing the entrances and spending considerable time clearing out the undead from the interior. Free of danger, the group begin to enjoy their confinement – living it up in shops, restaurants and salons, while the world outside crumbles to dust. But how long can this lifestyle last, before those that remain outside come to claim what they have selfishly held onto?

Sure enough, the final act is one of total chaos, conflict and total farce, as the mall is invaded by bloodthirsty outsiders, bringing with them the plague of zombies – which are officially now referred to as zombies, incidentally – and a last minute dash for survival.

To go into any more detail would be to undermine the joy of watching Dawn Of The Dead. Sure, the zombies look a bit naff, and yes, the blood appears to be made of leftover red grunge from Noel’s House Party, but get beyond that and you have a film that truly stands the test of time. As I mentioned, the groundwork is laid for every zombie film and television series that follows. You have a group of survivors setting out on their own, surviving through resourcefulness and clawing back what they can of the old world.

It’s been some time since I last watched this film, I’m ashamed to say, but it’s probably been long enough that I almost experienced the same visceral thrill of when I saw it the first time round way back when I was but a wee teenager. This is in huge part due to the special effects by the legendary Tom Savini, but also the physical acting of the main cast. Nothing feels easy, everything feels tiring. The zombies may not be sprinting at you, tearing you limb from limb, but you get the impression that they wont stop – and that they are a threat even one on one (although you’ll probably be safe if you keep running fast enough). 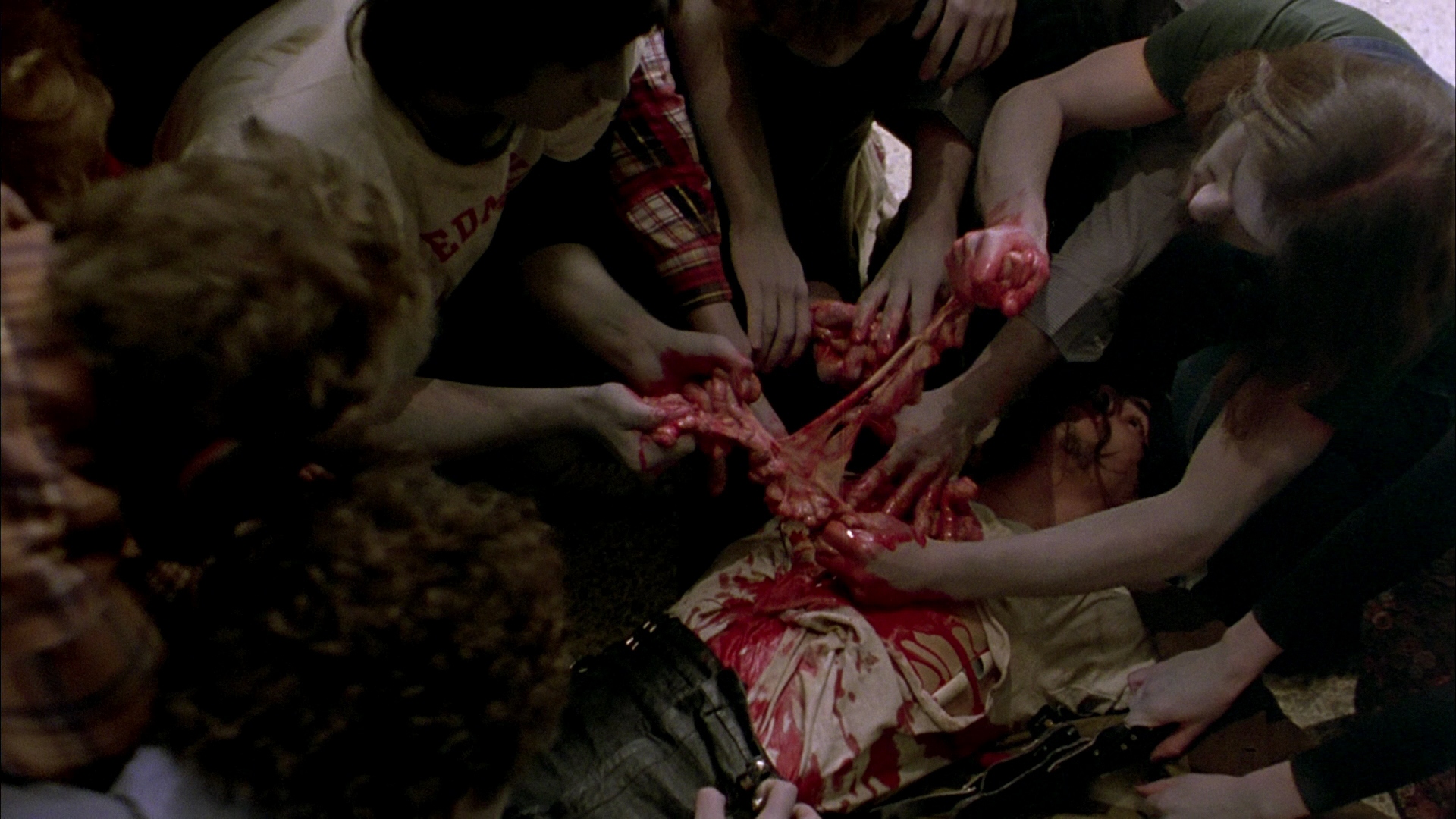 But what I really appreciate is the amount of time dedicated to just getting to know the environment – a peculiarly 70s phenomena. I love it. I love the fact we see the decision making process of what needs to happen, and, what’s more, how they plan on doing it. It makes you feel like you’re there with them – and that you might stand a chance if you just listen to these characters.

Of course, there’s so much more to say – how the zombies appear to act by instinct, populating the places they know and love (in this case, the mall), and even in one case, seems to act aggressively towards Roger – quite possibly for shoplifting! This itself can be seen as a statement of capitalism and greed, but really, it serves to reinforce the theme that the zombies are us. They are not alien, they are not demon, they are human – no matter what. They are our problem, and soon there won’t be any of us left to stop them.

I should also add that George A. Romero passed away earlier this year. He was an influential pioneer in the horror genre, making grey, satirical independent films become a staple of modern cinema. For this statement alone, he will exist for decades to come as a hero of many. Without the Living Dead series, I certainly wouldn’t have been inspired to study and learn the art of filmmaking in quite the same way.

In tribute to Romero, Red Letter Media made a simply excellent tribute video at the end of their re:View episode for another of Romero’s classic films, Martin (1978), which someone has very handily uploaded separately. Check it out below.