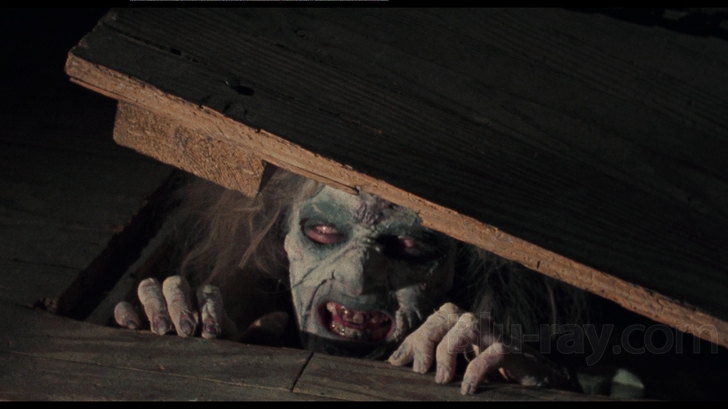 So here it is. The final chapter in this year’s 31 day blog-a-thon. While it’s been hard work finding the time to watch something and review it each and every day, I can’t say I haven’t enjoyed it. Even if I don’t include the review section, you can guarantee I will do this each and every year – and I recommend you do the same. There really isn’t anything quite so good in preparing you for the Halloween season than a list of silly, ridiculous, terrifying – and sometimes complete shit – films behind you.

For tonight’s finale, there really isn’t any other choice for me. One film over all others inspired me to find a passion in filmmaking, storytelling and brutal violence. Once again, this was a film discovered very late at night with a friend while flicking through channels. I daresay this was another Channel 4/FilmFour discovery, but I can’t remember clearly enough to say for sure.

That film, as was the case for so many others, was The Evil Dead (1981). Shot on a relatively low budget by a group of friends from college, The Evil Dead brought together some of the most talented, most passionate filmmakers under one cabin roof to produce one of the most widely acclaimed, widely ripped off films of all time.

Written and directed by Sam Raimi, and starring the impeccable Bruce Campbell in the title role, The Evil Dead tells a story everyone knows by heart – even if they haven’t seen the film. Full of unique shots, references to famous directors of the past and cream corn by the bucket, I watched this film with mouth open.

While it’s true that the sequel, Evil Dead 2: Dead By Dawn (1987) is by far the most popular of the series, I feel I can go back to the original and still find myself enthralled. If you want to make movies, you need to have seen this film.

The film opens on five Michigan State University students on their way to spend their spring break deep in the Tennessee hills, having hired an old cabin in the woods for the week. Because of course they did. In the car is Ash (Bruce Campbell), his girlfriend Linda (Betsy Baker), Ash’s sister Cheryl (Ellen Sandweiss), Scotty (Hal Delrich) and his girlfriend Shelly (Sarah York).

When they arrive, they find the cabin in a state of disrepair. Uneasy with the state of the cabin, but eager to get settled, the group tidy the place up and settle in for the night. While at dinner, the trap door in the living room area flies open mysteriously.

Scotty and Ash, rather than simply closing it again, decide to head down into the cabin’s cellar. Among the dried gourds and steam pipes, they find a shotgun and a handful of weird artefacts: A book, entitled the Nature Demonto, a tape recorder and an ancient looking dagger. They bring them back up to the group, and begin to play the tape while flicking through the human-flesh bound tome. 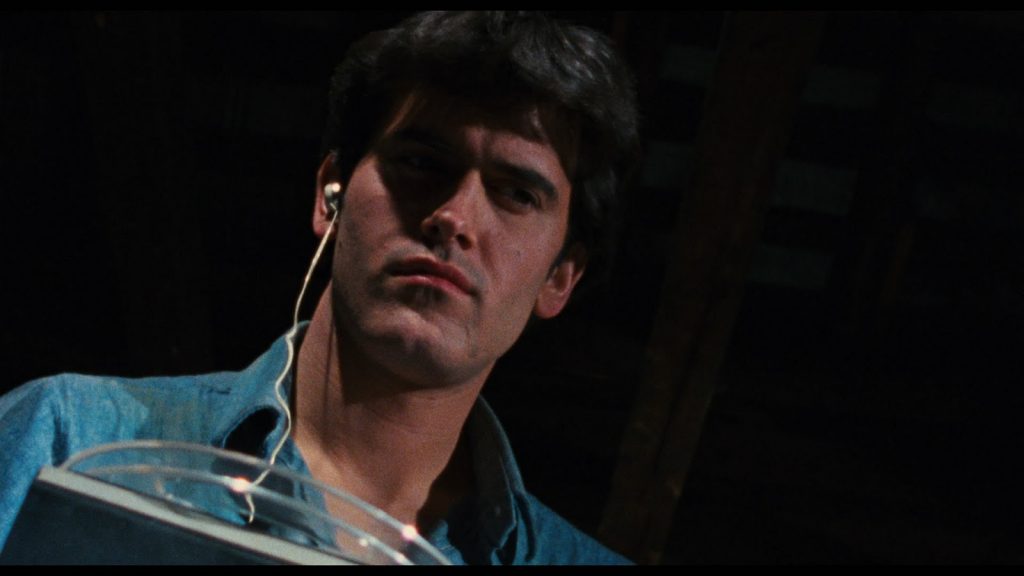 As the tape recorder broadcasts a series of ancient passages, Cheryl – having already displayed some sensitivity in the cabin – begins to turn hysterical, culminating with a tree tearing through a window. She retreats to her bedroom, but doesn’t stay long. Hearing mysterious voices outside the cabin, she heads outside and is lured deeper into the woods.

What follows is regarded as one of the most controversial moments of the film. As Cheryl heads into the woods, the trees begin to attack her. Accompanied by a chilling buzzing, the trees curl around her ankles and wrists, pinning her to the ground.

I remember this clearly. Watching with a friend, I turned to him and asked, jokingly, “Wonder where that tree is going- Oh.” 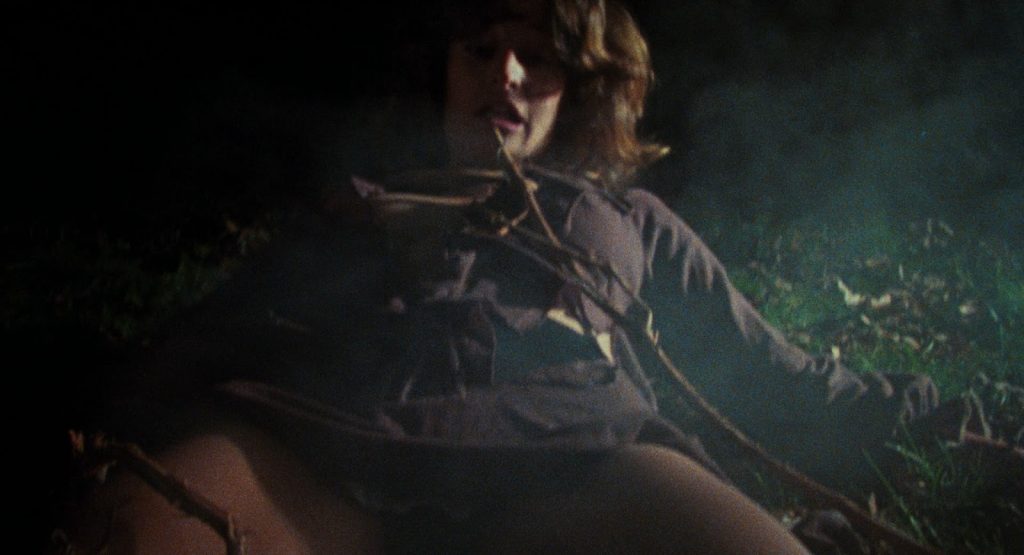 And then it happens. Cheryl is raped by a tree.

Fleeing the sadistic flora, Cheryl returns to the cabin and begs Ash to take her back to town. He agrees, but the two find the bridge they came in on has collapsed. They are trapped here. As the pair return to the cabin, Cheryl begins to exhibit some odd behaviour. Finally, it is revealed she is possessed and attacks the students, injuring Linda before Scotty throws her into the cellar and locks the door. Here she festers, calling out for their death and her release.

One by one, the students fall to the evil demon spirits. Possessing, attacking, murdering, until finally Ash is left alone, fearing for his life. As the demons begin to twist reality around him, we begin to wonder: will he survive the night?

Some of the best sequences in this film happen when we’re following Ash on his own, armed with a shotgun and wandering the cabin. What sticks with me is the overriding feeling that all he has to do is survive the night – in the day, everything will be fine again. This is toyed with by the ticking clock, that simply stops ticking – even running in reverse. As far as Ash is concerned, this nightmare will never end. 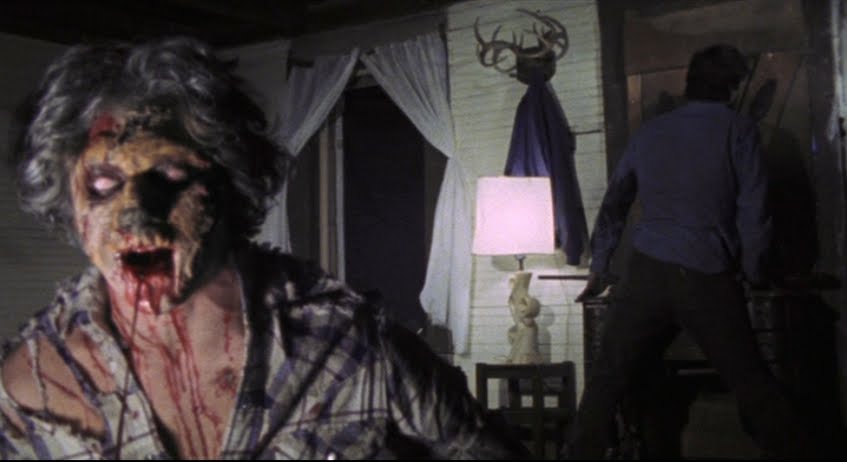 It’s said that Sam Raimi spent some time working behind the scenes in magic circles, which definitely explains how some of the practical effects came to be. Simple but effective techniques, such as mounted Cheryl to one end of a seesaw to produce a floating effect, or shooting a mirror frame on the ground to produce a ripple effect, as if the reflection is only water. There are so many dutch angles in this film, it may as well be wearing clogs.

While the sequels were more comedic in nature, the original still has plenty of laughs. Watching it back recently, I was quite surprised to be laughing along – but that’s the magic of this film. Compared with other films of its type, it stands out as energetic and passionate. It had love behind it, though the way I hear it, shooting the actual film was a nightmare in itself. Bruce Campbell himself has been quoted saying the filming process as “twelve weeks of mirthless exercise in agony.”

From my comfortable chair in a warm house in England, I can safely say that it was well worth it.

Watch this film now. Watch it again. Watch it with the commentary. You won’t be disappointed.

The Evil Dead has more than its fair share of fans. On and offline, there is huge community of horror fans dedicated to this series.

This is best reflected by the creative industry that has sprung up around the series, with comic books, fan films, video games – even a board game that is currently in the works. In my opinion, none of these can hold a candle to the truly wonderful Evil Dead: The Musical. The only musical theatre production I can think of that has its very own splatter zone.

Check out this clip and you’ll see what I mean (sorry for the quality – but it’s still great).