Home, Home On The Rance

It seems everything and their mums are being turned into television series these days. Fargo, Scream, Sleepy Hollow, Westworld, From Dusk Til Dawn – if it has followers, it has a television series.

The latest of these is an adaptation of The Exorcist (1973) that started in the UK last light on the SyFy channel. You’ve probably seen the adverts, I seem to see them everywhere. Once again, though, I do wonder – why? What can you possibly hope to achieve by turning a solid three-act narrative into a potential endless serial?

Opening on a familiar-looking figure prowling the streets of Mexico City, we are re-introduced to the world of exorcism by Father Marcus Keane (Ben Daniels) approaching an intimidating block of houses.

We cut to Father Tomas Ortega (Alfonso Herrera), a young, trendy priest in the heart of suburban America. His style appears to be engaging and current, showcasing the modern Catholic Church (if that isn’t a contradiction in terms – but there goes my cynicism balloon again).

While everything appears to be fine, Tomas clearly shows some concern for one particular family in his congregation – the Range family. Later, he is invited to dinner at their home where it is revealed that the family has been experiencing some problems lately.

The father of the family, Henry Rance (played by a suspiciously youthful Alan Ruck) appears to be suffering from some form of dementia or memory loss, which has driven his wife Angela (Geena Davis) to the edge – not helped by daughter Casey (Hannah Kasulka) returning home from ollege,s scarred by the loss of a friend in a car crash.

Each night, Tomas has visions of a gruesome exorcism taking place in Mexico City. The dreams are so vivid, he even appears to be in the same room. A young boy, strapped down to the bed, snarls and screams, spitting teeth over the figure of a priest, hard at work. 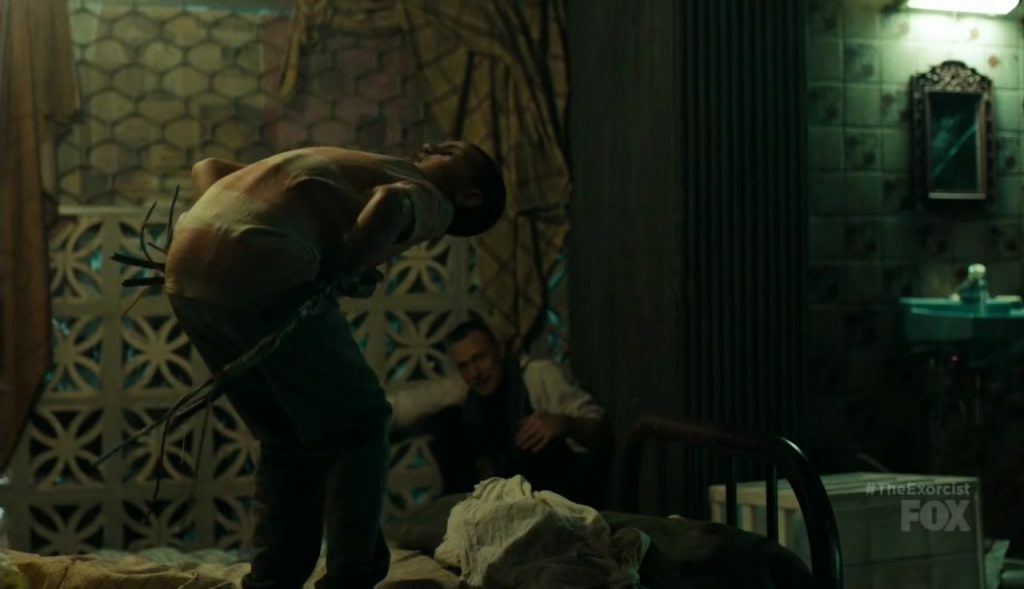 Each morning he wakes up a little more disturbed. He even begins to research exorcism – so when Angela suggests that her house is haunted by a demon (possibly in her somewhat disturbed daughter), Tomas hesitates. That is, until, a blood massive crow flies through the window and dies shrieking.

Eventually realising that exorcism might be the answer, Tomas tracks down a grizzled veteran of the act – Father Marcus Keane – and is shocked to find that it is the same man from his nightmares.

So there we have it, the start of a wonderful new friendship. A grizzled white veteran of the dark side of Catholicism and the smiling, upbeat face of youth in an unusual situation. Can these two opposing viewpoints share a task with driving each other crazy? [Cue Odd Couple music]

I appreciate that this is more of a pilot episode than a standard series opener, but I can’t shake the impression that the show seems to be trying too hard to be relevant. The confrontation between Marcus and another priest in Mexico City is laughably camp – somehow I doubt this was the vibe they were going for. 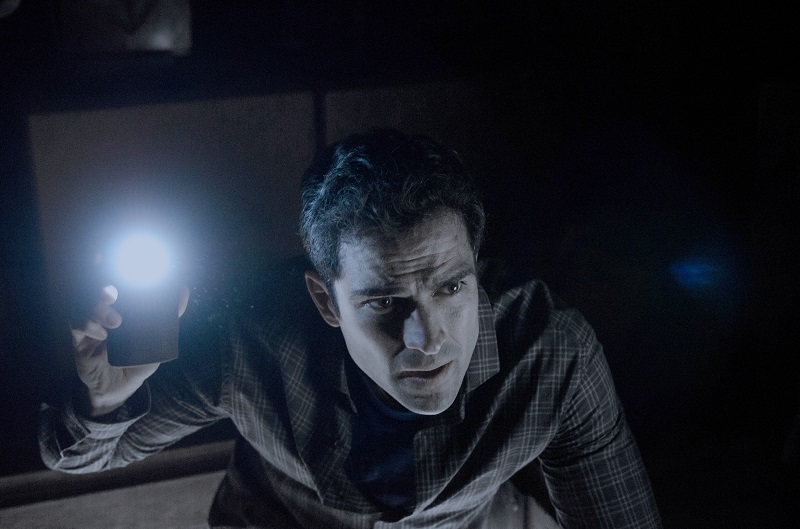 As for the horror side of things, there’s no doubt that the exorcism scenes stand out, even against other shows, but the sequence in the Rance’s loft is just silly. While a floppy girl may seem creepy, the effects feel so cheap to me that it’s hard to enjoy. If anything, Casey sans-demon is scarier.

I’m not sold on this. The only moment of joy I had was hearing the Tubular Bells at the end – WHICH WERE INEXPLICABLY CUT OFF BEFORE THE CREDITS. Poor show.

The original Exorcist film has a huge impact on its release back in 1973. Check out this video for some genuine audience reactions.

I highly doubt the television series will quite have this impact…