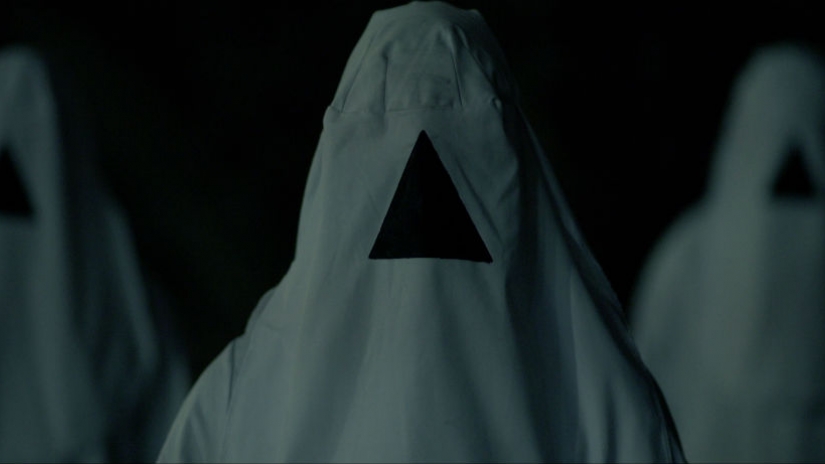 It’s no secret that the eighties were a big deal. I even discussed it in my review of The Night Of The Comet (1984) yesterday, but I feel like this is a point worth reinforcing. See, it isn’t just that we love eighties films, the creative industries are packed to the brim with genre pieces emulating and pastiching the creator’s love of the decade. Take Strangers Things (2016), for example. A hugely popular show on Netflix that has managed to capture the imagination of a massive general audience. Why? Because it’s a homage to everything that we grew up with – whether it’s ghostly shenanigans, inter-dimensional monsters or smart arse kids with BMXs, anyone who paid the slightest bit of attention to popular culture will understand these references – and mostly get a kick out of it too!

Enter Astron-6, a Canadian film production company that just lives and breathes genre pastiche – but not in the way you might expect. I know them from Manborg (2011), a ridiculous sci fi action comedy that was everything Kung Fury (2015) wanted to be. You may always be aware of Father’s Day (2011) and The Editor (2014). The point is, these guys love doing what they do – and what they do is pay homage to the greats in the most ridiculous way possible.

Until, that is, they got to The Void (2016). Written and directed by Steven Kostanski and Jeremy Gillespie, The Void was an IndieGoGo campaign that promised to tell a story of Lovecraftian cosmic horror, through the lens of a John Carpenter nightmare. It’s no surprise that the campaign quickly found success, reaching over $82,500 in funding. Let me just say it now – these guys know how to spend their money effectively.

Deep in darkest Somewhere, America, things are kicking off. Bursting from an old abandoned farmhouse, a dishevelled man by the name of James (Evan Stern) runs for his life. Behind him, a young woman attempts to flee, but is shot in the back by Vincent (Daniel Fathers) and his son Simon (Mik Byskov). They swear they’ll catch James, but not before pouring petrol over the injured woman and burning her alive. Huh.

Further down the road, Police Deputy Daniel Carter (Aaron Poole) is bored out of his mind. Nothing ever happens around here, he bemoans to the woman on the other end of his radio, but is taken by surprise as he sees an injured James fall out of the woods and onto the road. Initially thinking he was just a drunk kid, Daniel quickly realises he is wounded – and drives him up to the nearest hospital.

Mostly abandoned, the hospital maintains only the minimum amount of staff after a fire wiped out most of the building some time prior. It’s here we meet Dr Richard Powell (Kenneth Welsh), Daniel’s estranged wife Allison (Kathleen Munroe), nurse Bev (Stephanie Belding), student nurse Kim (Ellen Wong), as well as pregnant Maggie (Grace Munro) and her grandfather Ben (James Millington). Oh, there’s also Cliff (Matt Kennedy), a bedridden patient who no one seems to really care about. Including the film.

When Daniel arrives, James is quickly taken in by Allison and Bev as Daniel is left to wait in the hospital to meet the rest of the cast. Then things start to go weird. Going to find Bev, Daniel opens the door into Cliff’s room to find Bev standing over him, the bloodied knife in her hand deeply embedded in Cliff’s eye socket. Oh my God. Acting as if in some kind of trance, Bet appears to shave off chunks of her face as she turns on Daniel, charging at him. He manages to raise his gun quick enough to shoot her, setting the whole hospital into a panic. 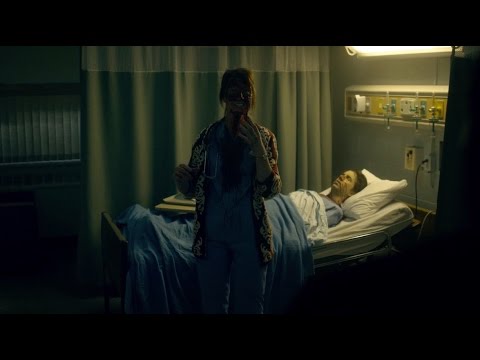 Daniel staggers away to recover, instead suffering a seizure, where he witnesses a number of strange images before he is woken by Dr Powell and Allison. Weird. After speaking with a State Trooper who was called in after the farmhouse attack, Daniel heads outside to call in the incident that led to Bev’s death. While he is in his patrol car, however, Daniel sees a mysterious robed figure, wearing all white, displaying a weird black triangle where his face should be. Approaching him, Daniel is taken unawares as he is savagely attacked by the figure – who isn’t alone.

Running back to the hospital, Daniel is followed in by Vincent and Simon – and things really start to go crazy. Hearing some commotion in the room where James has been handcuffed, Daniel and the State Trooper discover the gruesome remains of Bev have mutated into some sort of giant, fleshy creature.

Surrounded by robed cultists, and sharing a small space with pulsating eldritch horrors, the truth of the hospital’s foundation starts to unravel. But who is responsible for the terrors that lie beneath the building, and to what length will our heroes go to find sanctuary and destroy the forces of evil?

It’s my belief that there are three types of horror: 1, AAAAH! 2, Oooh.. and 3, EWWWWWWW. These types are open to interpretation, of course, but The Void is so firmly in Type 3 that it doesn’t even need further discussion. The special effects in this film are unbelievable. Setting their goal to create practical effects from day one, Kostanski and Gillespie have outdone themselves with this film. There isn’t a prosthetic or effect that doesn’t make you want to put down your spaghetti bolognaise and walk away for a while. It is glorious.

Special props go to the scene that takes place beneath the hospital. If you’ve seen it, you know the one. If Event Horizon ever had a spin off set in the hell dimension, you know it will look a hell of a lot like this.

That said, it isn’t perfect. While the film revels in its pastiche of the works of John Carpenter and Lucio Fulci, there isn’t much to say for the writing. Sometimes hard to decipher, the plot of the film feels somewhat underdeveloped – while the characters might as well be cardboard cut outs for the most part. If you’re looking for a solid effects film that captures the feel of H. P. Lovecraft, then look no further. It it’s fully rounded characters you want, well, go away.

But you’ll be missing out!