You’re on your sofa, cradling a steaming cup of tea while your hungover brains dribble out of every facial (and in some cases, non-facial) orifice. You’ve managed to get home, that’s one thing. Presumably you have a roof, and enough walls to conceal your shame to the world. This is also a good sign. But there is more than simple physical boundaries that will help you right now.

A hungover brain is a delicate thing. Walking the knife edge between toddler and pensioner, the aching physical frailty of a human post-alcohol abuse can be soothed with, among other things, a good injection of entertainment. Film is the obvious choice, but when dragging yourself over to the shelf of DVDs and Blu-Rays can often be just a little bit too much effort. Especially when you can just lie back, brainlessly mash buttons on the black lump of plastic that you swear used to have a name and vegetate in front of the colours and sounds coming from your television.

Television! The box of dreams.

Then you realise the truth of it. Sunday morning television is bad. Really, really bad. One look at next Sunday’s television guide promises a choice of lovely chummy let’s-get-your-mates-round-to-cook-a-meal-and-have-a-right-good-laugh-about-the-football twatfests, political debate broadcasts, or a stroll through the steaming corpse of non-terrestrial channels – luring you in with promise of Storage Wars, Teen Mom, Ghost Hunters or Murder, She Wrote.

It’s all such shit. There is nothing original, nothing noteworthy. Sunday mornings have become something so tame, I doubt the BBC would broadcast a sad face for fear of offending an audience of imaginary down-turned face sufferers. Channel 4 isn’t much better. I just wish there was something… better. Something that wasn’t afraid to push the boundaries and do something truly original. 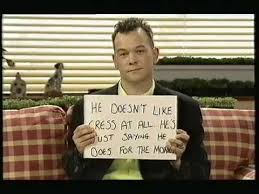 It was, in a word, perfect. 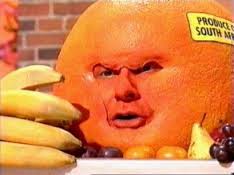 There was enough in it to make me laugh until I cried in one scene, then feel sick with terror in the next. I was somewhere between eight and ten when the show was originally broadcast at Sunday lunchtime and I highly doubt my parents knew what I was watching, or what was going on in my damaged childish mind.

I distinctly remember three things from childhood: Richard joining the ranks of celebrities and television executives by becoming addicted to ‘sherbert’ and becoming increasingly violent when he is cut off from his supply, the Curious Orange (played by the amazingly talented Paul Putner)

‹ ›
losing his mind and unleashing a campaign of terror against his human oppressors and Richard’s Corr Shine (call it by it’s name), with its collage of pictures stuck to the wall with an unusually salty homemade glue. 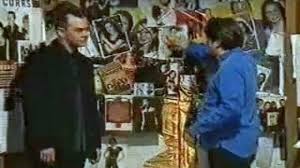 It’s worth remembering that in the mid-to-late nineties, Lee & Herring were big news. Starting their writing career on the radio, Lee & Herring were right up there the comedy greats. As years have passed, I’ve heard more and more about their influence on British comedy and it’s quite amazing. Remember that scene in I’m Alan Partridge, when Alan ends up back at a rabid fan’s house, surrounded by pictures of his face? Yeah, that was based on something that happened to Stewart Lee. Look it up, it’s a great story.

Sadly, Lee & Herring eventually disappeared from popular culture – until a few years ago, when Richard Herring found success with a joint podcast/live stage show format and Stewart Lee, well, he pretty much hit the big time for subversive, alternative comedy when he began touring again. If you haven’t seen Stewart Lee’s Comedy Vehicle on the BBC (now on Netflix!), then prepare yourself for something incredible. It will change your life.

But what point am I trying to make here? I suppose what I’m saying is how can a relatively small scale television show from 20 years ago still make me laugh, more than anything else on television now. I’m sure a part of it is nostalgia, of course it is. But the real belly laughs from me are quickly followed by a shake of the head and a muttering of, “How the hell did this get broadcast?”.

Why can’t these shows still exist? Even SMTV: Live and Ministry Of Mayhem provided more subversive thrills than the current scraps of entertainment available. I want anarchy in my live television. I want the feeling of danger – that if a gag doesn’t work, it’s a failure for us all. I want to feel like I can make the sort of shows I watch and, what’s more, I want to laugh again.

PS. Due to licensing issues, TMWRNJ isn’t actually available on DVD – but it’s all on YouTube for your viewing pleasure. See below for episode 1! You should also absolutely visit the Go Faster Stripe website to pick up some of Lee & Herring’s work. It’s all good stuff.