Did you ever watch something as a kid and be so utterly terrified it put you off rewatching whatever it was? THEN did you ever realise that the film itself isn’t at all scary and you sort of wonder whether you’re watching the same thing?

I’m not sure if I was just pathetic during my early years, or whether I’ve built some immunity during several years of slasher and zombie flicks, but this happens to me a lot. The one that comes to mind first and foremost is Tremors (1990), that scene when Val and Earl find the farmer’s face staring up at them in the ground? Jesus Christ.

I had the same thing with Poltergeist (1982). God knows how young I must’ve been when I first watched this, but I couldn’t look into a mirror for weeks for fear my face might start falling off. Don’t even mention the toy clown.

Regardless of this, Poltergeist often comes up in conversations about Steven Spielberg. While Tobe Hooper is credited as the film’s director, speculation about the on-set partnership between Hooper and Spielberg have circulated for years. The rumour being that Spielberg, who was under contract by Universal Studios not to direct any other film while E.T. the Extra-Terrestrial (1982) was in production, used Tobe Hooper as a cover to direct the film.

I think it’s safe to say that the truth is a little less black and white, but whatever the case, Poltergeist genuinely holds up as an excellent example of storytelling and special effects – albeit not the bone chilling horror I once thought it was.

Over several nights, Carol Anne, the youngest of the family, is apparently drawn towards the static of an idle television. She appears to hold conversation with an unseen presence, each time the whispers get louder – and when a ghostly shape emerges, Carol Anne tells the stunned family that “They’re heeeeere..”

The next day, strange things start happening throughout the house. Furniture appears to move by itself, glasses smash, and the show off spirits even try their hand at interior decorating. 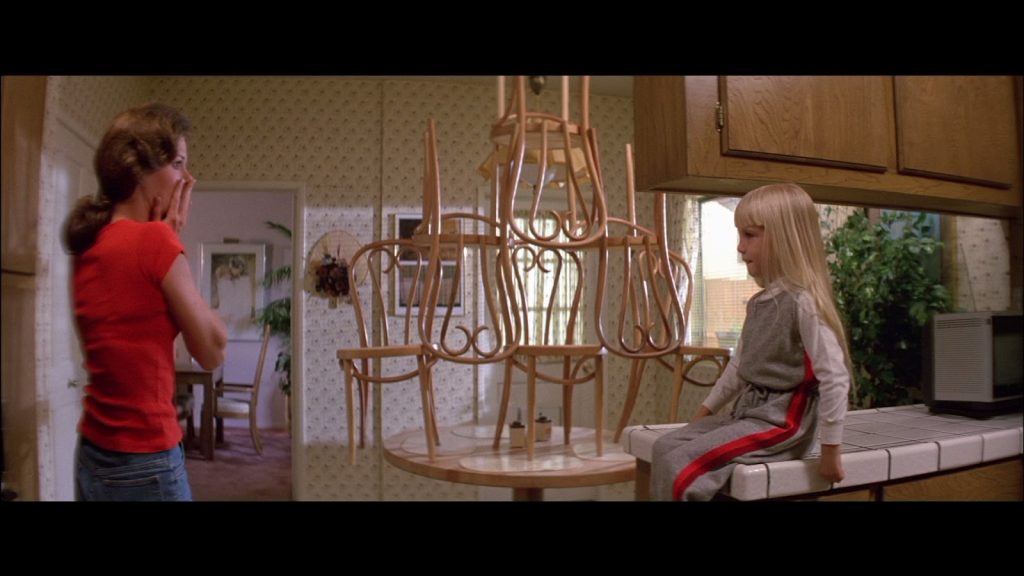 However, that night, things start to turn malevolent. During a thunder storm, the tree outside smashes through the children’s bedroom and appears to snatch at Robbie, dragging him outside. The house shakes and tears itself apart as Steven and Diane try to save their son, little do they know that back in Carol Anne’s room, a voice is calling for her to join it in her closet.

As the chaos settles down, they see what appears to be the cause of the terror – a twister drifts off towards the horizon. Their calm doesn’t last long, however, as they soon realise that Carol Anne appears to be missing…

With no more corners to turn, the Freelings call in a group of parapsychologists from the local university to investigate the unusual events taking place in the house. They quickly determine that it seems to be a poltergeist that is causing the problem – and that there is more than one spirit in the home. They are particularly disturbed to hear a frightened Carol Anne call for her mummy – through the static of a television set.

As the parapsychologists continue to investigate, we begin to learn the scale of the spiritual manifestation in the house – and the threat they pose to the people who live there. As Diane fights to save her daughter from the spiritual realm, Steven is shocked to discover their home may be built on consecrated ground. A cemetery may well be resting beneath their feet.

But sometimes the end, isn’t quite so final as it seems.

I really enjoyed watching this one back. I forget that, actually, this is a very funny film. Sharp, well executed comedy moments play against some incredibly inventive and impressive cinematography and special effects. The performances, too, are some of the best of the time – and pleasingly, it isn’t full of distracting A-Listers.

I also enjoyed that the narrative followed the parents of the family – leaving the children as supporting roles. For most of the film, the two older children aren’t even there – they are staying away while the parents try to get to the bottom of things. I appreciate this slice of realism.

A great watch, but… perhaps not one to show the kids until they’re a little bit older, okay?

Not sure if you fancy this for Halloween? Trailer not selling it for you?

Check out this great modern-style trailer by TwistedKingdom74 on the YouTubes. It’s a good one!