AKA Why Is This Happening To Me? 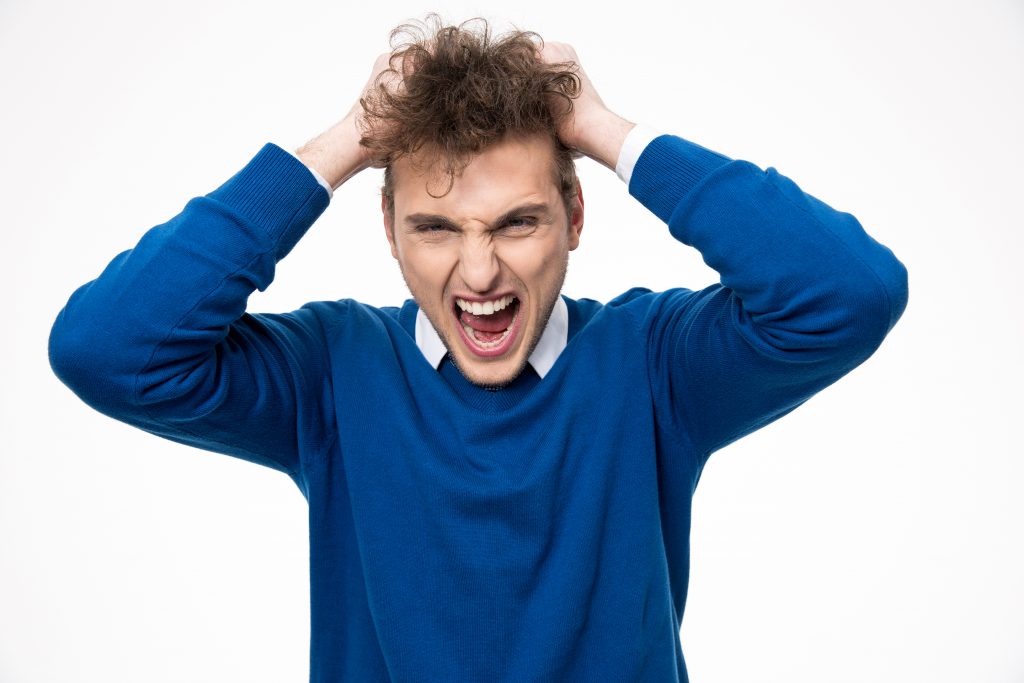 I’m going to be completely honest with you. I wasted this weekend. In fact, right now, I’m sitting here staring at the computer screen with a banging headache and sense of despair that can only mean one thing – I’ve been playing on the Xbone again.

I’m not saying that video games are bad or that I disagree with them – far from it. But when you’ve spent a whole Sunday afternoon doing nothing but hunt down raider gangs in the ruined post-apocalyptic wasteland of the Boston Commonwealth, I can’t help but feel that I’ve wasted my time. It’s not even just a feeling, if the banging behind my right eye means anything it’s that I have a physical reaction to this waste of time. A procrastination hangover, that can often last a whole other day or two while I pull myself together enough to be useful again.

I often have the same reaction after a prolonged period of watching television – seemingly putting me at odds with virtually an entire generation of boxset bingers. I say it now, proudly – I could not give a toss about the coming winter or the man who knocks. I have too much to do, so many projects to finish and, oh, I suppose I could handle a couple more hours on the Xbone…

And this is how it goes. A vicious cycle.

What’s interesting here is the term, “procrastination hangover” already seems to exist. Having been incredibly proud of myself for coming up with this game changing piece of terminology above, I decided to take a look online to see if it was out there already – and lo and behold, there it is.

You have been summoned to meet the top executive of your business and after a nervous, but rewarding, meeting, you leave Mr Bastard’s office immensely enriched and excited to be given a project of your very own to be completed and submitted in a couple of weeks. You realise that the world now rests on your shoulders – this project has to be perfect. It has to be the total culmination of everything you’ve learnt in your career and it must impress if you ever hope to achieve anything in your worthless little life. Oh, dear.

You begin to drag your feet, knowing that you have so much work ahead of you to reach this ultimate goal. You worry, you nag at yourself, but deep down you know that tomorrow – tomorrow will be the day when it all starts. The next thing you know, you’re sitting in Mr Bastard’s boardroom with nothing in front of you but an ocean of blank faces that not even a striptease can get you out of.

The central issue appears to be self confidence and fear of failure, but the truth of it lies in your wish to achieve something so perfect that it is simply unachievable. In short, being a perfectionist will only hinder your progress. You are your harshest critic, so much so that you will never get it right. You are stuck.

This inability to move forward is what leads to procrastination. Whether you just can’t get past the bump in the road in front of you, or simply being afraid of imperfection, distraction is simply the ideal way to avoid the wider issue and feel like you’re doing something useful. This is so accurate, it’s disturbing.

The question is, why the hell does it matter so much to me? Why do I have such a need to do something productive? Why do I only really feel fulfilled after creating something, even if no one else will ever see it? I am sure I’m not alone in feeling this way, in fact I can think of a handful of people who genuinely suffer as a result of this need to create.

For answers to these questions I consulted the only truly source of wisdom I can think of, who, for the purpose of this article will refer to as The Oracle. Or perhaps just Google. Yeah, that’s probably easier.

To start, I tried searching for the title of this article – ‘why be creative’. 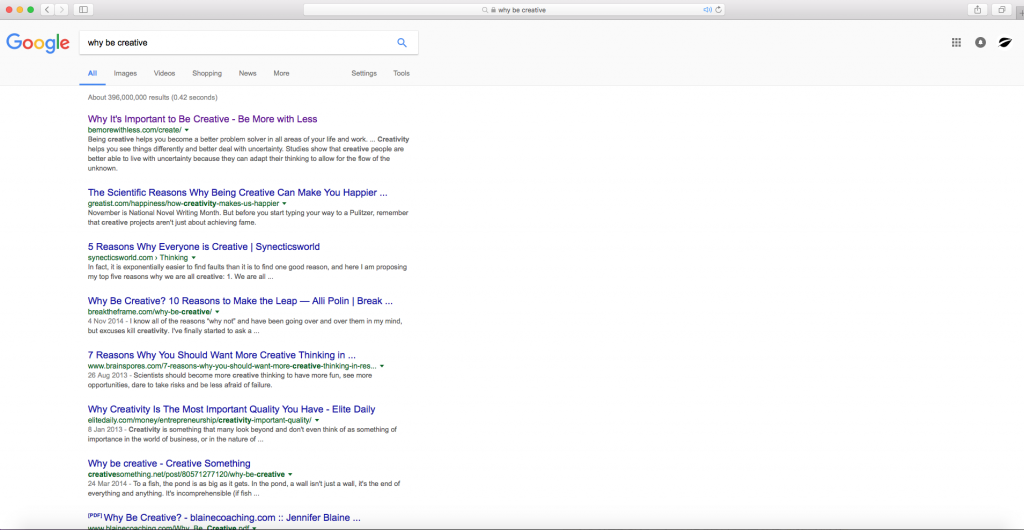 As you can see, there are a lot of results to this question – but having scanned through most of the top results, it seems that most of the articles are to do with ‘taking the leap’ and becoming creative to make your life a happier one.

Not quite what I was looking for, but I’ll run with it.

The reasons to introduce creativity into your life are plentiful – and many even seem to be supported by science. Actual, genuine science. Not just your hokey New Age science, but physical evidence that creativity renews and energises the mind in the same way exercise invigorates the body.

Kirsten Nunez explains this particularly well in an article published on http://verilymag.com/2016/01/mental-emotional-health-creativity-happiness, where she explains that embracing your creative side benefits your mind and body in the five following ways:

While I agree with the general principle, this list seems to take a peculiar approach on the subject of creativity. Correct me if I’m wrong, but isn’t creativity more than just something you can subscribe to? I only have to look back to my own life to see that my interest in being creative has built as many barriers as it has broken them down wth my peers.

For those that lacked this spark of creativity, their frustration and confusion seemed more than someone that just hadn’t signed up to the hobby, it was like speaking a different language. What is it that creates these barriers? I’m dismissing IQ, education and wealth as factors here, because I can think of just as many creative types who gave up on education as walked away from university with a tin of alphabetti spaghetti following their names, regardless of their background.

I decided to change up my search, searching instead for ‘why are some people creative’. 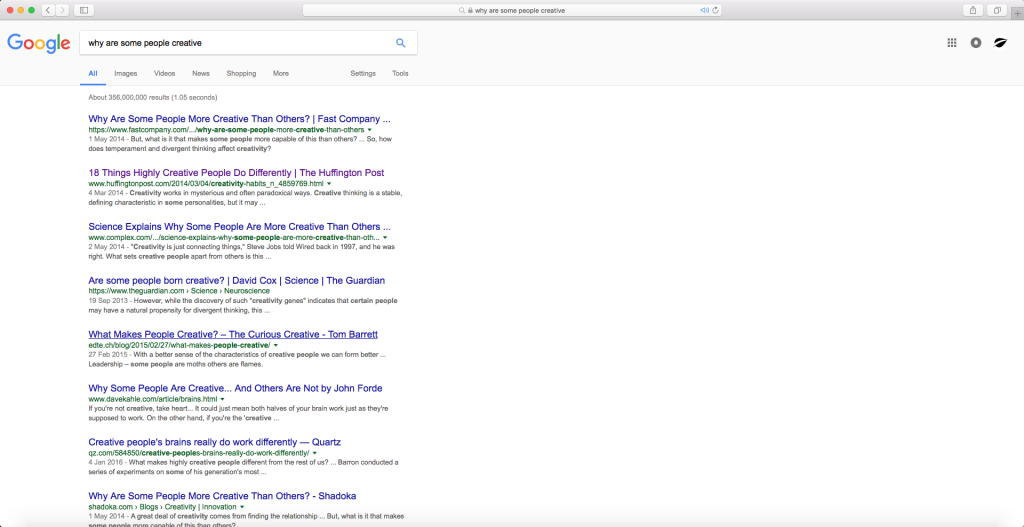 This is where things got a little more interesting, if complicated. You see, in the most extreme examples, there is a difference. A quite remarkable difference in the creative and non-creative types of person. It’s all about the brain.

I’m sure most of you out there will understand that the left and right sides of your brain manages different parts of your personality, the left is known to take dominance over reading, writing, calculation and logical thinking – whereas the right is far more abstract, concerning three dimensional space and artistic impulses.

As David Cox explains in this article from The Guardian, https://www.theguardian.com/science/blog/2013/sep/19/born-creative-study-brain-hemingway, there is evidence to suggest that the spark of creativity may lie in the connection between the left and right sections of your brain. Most fascinatingly, the manner in which the sections of a creative person’s brain communicate appears to be startlingly close to those who have been diagnosed with mental illnesses such as bi-polar disorder and schizophrenia.

Now, the historical link between exceptionally talented artists, musicians and writers with bi-polar disorder is a famous one – Winston Churchill, in particular, referenced the ‘black dog’ that followed him wherever he went on multiple occasions. As the article explains, the interesting part is that even the relatives of those who have been diagnosed with various neuropsychiatric disorders possess a higher than average interest in creativity. What does this mean? Weeeeell, it would seem that the spark of creativity may lie with a particular set of genes – nature over nurture, indeed.

I can’t help but let my mind wander over the subject of creativity online. Of all the blogs, vlogs, podcasts, social media profiles and everything else out there – just how much of it relates to the study of art? Film, television, literature, comics, art, gaming, cosplay – indeed the whole ‘geek’ subculture – how much of this exists to fulfil a desperate creative’s need to satisfy their need to produce something of value? How much of this has its root in anxiety, in some form of neuropsychiatric disorder?

This can’t be the be-all, end-all of the origin of creativity. There is another, quite major element which I haven’t brought up yet. You see, we are living in an age of unprecedented communication. An age of post-truth politics, of culture being mediated through a computer screen and, most importantly of all, a new age of identity and credibility.

In short, while communication has never been so omnipresent in our day to day lives, the majority of us feel more alone than ever before. When you only experience the world through your computer screen – hell, even this is outdated, now it’s your phone screen – your sense of identity and credibility is earned through your presence online. Are you the most followed person in your class? Did someone not like that post you made about feeling frumpy after giving birth?

Before you know it, you’ll be earning millions of dollars for sitting on your arse making inappropriate  comments over the top of someone else’s hard work and raking in the followers and offending millions. 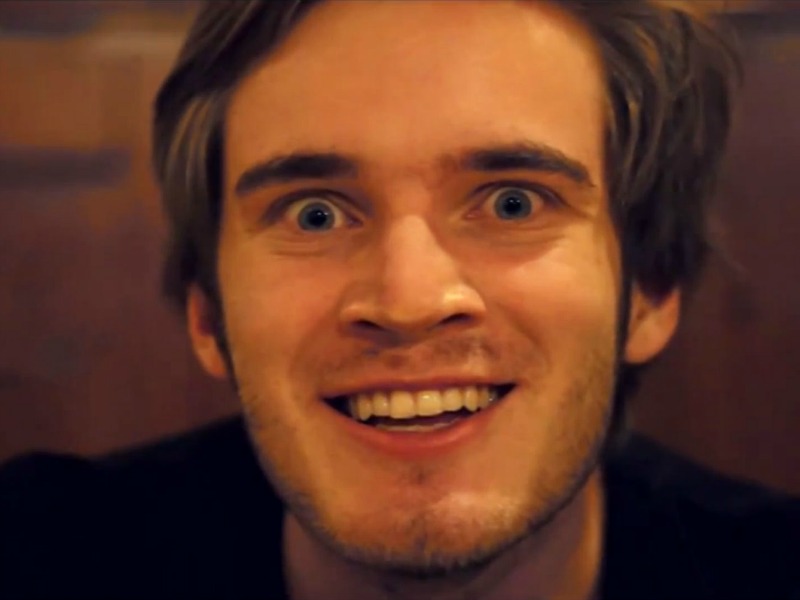 So, then, in conclusion, why should you be creative? Well, if you’re not already actively engaged in something creative then it’ll be great exercise for your brain. It will reduce your levels of stress and allow you to gain confidence in your abilities.

If you’re already engaged in a creative project and are currently tearing your hair out mid-procrastination hangover, pff, who knows. There doesn’t seem to be any answer to your questions – except that, maybe, just maybe, you are genetically built to be creative and/or share many of the symptoms that those with bi-polar disorder and schizophrenia report.

That said, if your fully committed, your persistent work and creative discipline may just earn you a slice of the action online – and this just might set you up for life.

Now, then, back to the Xbone.

Agree or disagree with any of the above? Post below or hit me up on Twitter – I’d love to make this a recurring series of articles while I confront my own lack of discipline. It might just force me to pull my finger out and get on with some real work.